Since its foundation, the Windsor Public Library system has supported literacy, education and life long learning.  At the opening of Carnegie Library in 1903, the Honourable Richard Harcourt, Minister of Education for Ontario, addressed the crowd, offering guidance on reading and advised that if followed “would distinctly improve the proclivities of our citizens” (R. Harcourt, WPL Annual Report, 1903). To improve the inclination of citizens to read and to encourage adult education, librarians made a special effort to make personal contact with each person visiting the library. Lists were also created to assist customers in choosing reading material.

The growth of the automobile industry in the Border Cities grew the population from 15,000 in 1901 to over 175,000 in 1954. With this growth came the need for increased library resources and services. To support the population and area of work, the Windsor Public Library began creating a technical section where employees could find the best, most up-to-date books on subjects of importance to them.

The library’s books were selected by a committee, which chose books to match the interest, needs and tastes of the community. Technical books were often recommended by experts in the field.  “Readers may make the library a continuation school, where everyone may take a post-graduate course in self-culture.” (Archibald Coulter, Chairman of the Board, WPL Annual Report, 1907)  The selection of books emphasized further education, vocational training and the classics as a part of well-rounded reading. Education of adults continued as librarians fostered an appreciation of books and how to use them, and with the inauguration of other services including films, records, pictures and music, an important addition in adult education was formed.

By the end of the 1940s, the library partnered with the Education Council to provide naturalization citizenship classes, offering free use of films, books and librarians’ expertise to speak on what the library could offer new Canadians.

In 1960, Willistead librarians started a popular Great Books Discussion Group. At the Carnegie Branch, a series of lectures called “Law for the Layman,” presented by members of the Essex County Law Association as co-sponsors was so popular, that the auditorium was standing room only.

These education partnerships remained a part of the Windsor Public Library’s education program.  In 1962, Gladys Shepley was the guest speaker at a series of educational lectures about critical reading which was sponsored by the Windsor Arts Council and the library’s Adult Education Services.

In 1963, a lunchtime book education program was started to educate downtown business workers.  This program continued to the new Main Library with the 1975 -76 series called “A Cavalcade of Canadian Authors.”  Variations of this program continued in 2013 with programs such as the “Best Sellers” group.   Lectures and educational films were incorporated into the educational programming. The new Main Library had specifically designed space for community groups to meet and learn, such as photography clubs, public forums on legal issues and presentations by the police force.

The library adopted a policy to reach out to older adults in 1988, by ensuring that libraries be accessible and welcoming to them, including building collections of Large Print books, CNIB Talking Books and expanding programs in the afternoons rather than in the evenings or at busy lunchtimes, and later, to offer computer instruction.  In 2012, Elder College classes were welcomed to the WPL meeting rooms.

The Windsor Public Library has a mandate to support adult literacy in the community and throughout its decades of service, has offered several programs to support this.  In 1978, a WPL Staff Task Force studied librarians’ concerns about illiteracy in Windsor.  The report next year recommended that the library establish a pilot project to conduct a one-to-one volunteer tutoring program.  The project’s budget provided materials for tutors and learners, office space at the Main Library, and a part-time Literacy Coordinator. In the 1980s, librarians such as Dorothy Madge oversaw a program that matched adult students with volunteer tutors on a one-to-one basis using the Laubach Instructional Method.

In 2000, the WPL Board made a motion regarding literacy, stating that it “desires a literate community to ensure independent access to the printed word” (WPL Board Minutes, September 21, 2000).  In 2001, the Board quantified the goal of eliminating functional illiteracy of at least 20 people a year.   By this time, WPL was one of 300 sites in Ontario that received support from the Ministry of Training, Colleges and Universities (MTCU), Literacy and Basic Skills (LBS) Program. GreenShield Foundation of Canada provided an initial two-year grant of $20,000.

The program was supported by Windsor Volunteers for Literacy, a non-profit volunteer group of advocates for literacy training in Windsor. In 2011, a Deaf Stream Literacy program was launched at the Canadian Hearing Society location.  The program continues in 2013 with an Adult Literacy coordinator, assessor and three instructors.

The inauguration of night school classes brought a demand for technical books including books for the latest information on radios, automobiles, engines and metal work and daily routine work for the librarian included preparation of reading lists and bibliographies that were desired by customers. WPL promoted technical education to supply manpower for industry in Windsor by establishing the Technical Sections in the adult libraries.  In addition, Ford Motor Company donated funds to buy technical books and magazines, further developing this section in the library.

Cooperation with Windsor Public Library and the University of Windsor libraries continued and they shared services as well as expertise. In 1976, for example, Faculty of Law staff and professors conducted seminars on law reference works and books on the law for WPL librarians.  Faculty from the university also appeared as lecturers for informal educational lectures at the WPL.  The University’s technical resources also assisted with copying and microfilming circulation records and shared data from their own newly-automated cataloguing program.

Recently, the WPL has partnered with the University of Windsor’s new medical faculty to offer public education on new research in subjects such as breast cancer and diabetes.

To engage younger citizens, the library established specialized children’s departments where appropriate books were available, and a children’s librarian was available to encourage and guide young readers.  Children’s hour was started to interest young readers who were invited to attend and listen to stories. Reference and supplementary reading material were made available for school studies and popular fiction for recreational reading. Throughout the next decade, the library strengthened its cooperation with the school board, offering talks whenever requested and meeting with new teachers to introduce them to the services of the library.  Books were loaned to schools that were not located near the library and teachers reported the importance of these library books to the children.

The late 1920s and throughout the 1930s, juvenile libraries were opened and enjoyed high membership and circulation of books.  Children’s activities, such as story hour and class visits encouraged reading and use of the library.  Information services to aid children with school work were also available.

A Parent-Teacher Reference Library was established in the ground floor room at Willistead for teachers and parents.  The collection included basic books for a home library, child guidance reference and elementary education and titles to supplement school curricula.  Teachers used the library regularly to stimulate their pupils in reading.  They were requested to submit a list of recommended books, which the librarians acquired for the shelves.  Along with required supplementary reading materials, a collection of books was displayed for easy access to high school students visiting the library.   To further connect the library with the schools, the librarian regularly gave talks about books, reading and the library at local schools, home and school clubs and different associations in the city. These talks, along with a story hour became so popular that some requests for a librarian could not be met. Librarians were also active in the community, acting as judges for public speaking contests, debates and speech contests in the schools, sat on service club committees and prepared a myriad of displays at conventions and group meetings.

The opening of a children’s library in St. Alphonsus school lead the board to declare that, “the Public Library stands for that very thing; its educational policy follows a citizen from the cradle to the grave” (WPL Annual Report, 1941).

A Saturday morning art class for children was inaugurated in 1943 by art gallery curator Daphne Hein, who also gave gallery talks to the children based on the current exhibitions. As the WPL Board developed the gallery, a picture loan rental, and later the sculpture rental collection was available which offered art work to show in homes, offices and school rooms for a monthly rental charge.

Library branches were opened in the city’s schools in order to ensure that children had easy access to books (see Branches).  In the 1950s, a new program for Kindergarten students at Prince Edward School library allowed children to choose books to read for a week, and were even issued their own library card and stamp. Books were sent home with students in plastic bags for safe keeping by solicitous teachers and librarians. The hope was that by the time they reached Grade 1, children could choose their own books and take good care of them.

Members of the Boards of Education were represented on the WPL library board. In 1965, the University of Windsor, St. Clair College, the Boards of Education and the Windsor Public Library formed a Windsor Education Co-ordinating Committee to identify needs and coordinate programs. The Carnegie Branch had set up a Parent-Teacher Reference Room in 1962, which housed a demonstration collection of basic books for a home library, books on child guidance and elementary education, and titles to supplement elementary school curricula. Canada’s Centennial in 1967 brought a flurry of teachers’ and students’ requests for information about projects.  Librarians gave annual “tours” to Grade 8 students each spring so that they would be able to “graduate” into adult books as they entered high school.  Teenagers were encouraged to access scholarship and post-secondary education information available at the library, which acted as a guidance resource during these decades.

In 1969, the WPL set up a Special Education Pilot Project in conjunction with the Board of Education which consisted of a librarian visiting each class with a selection of books and leading a book discussion.   Students and teachers found that this program renewed interest in books and reading and encouraged them to visit the libraries themselves.

School libraries benefitted from the educational programs of the WPL. In December, 1987 a public library terminal was installed at Catholic Central High School and other schools, and public librarians trained school librarians in its use.  Public librarians also helped to set up school libraries, as in 1994 when St. Joseph’s High School expressed appreciation to librarians for doing so. In the 1990s, the WPL hosted a “Summer Reading Connection” juvenile literacy program for children aged 7 – 12 years old who were experiencing difficulties in reading.  In 1996, the program connected 45 students with tutors and the demand for the latter outweighed the supply. 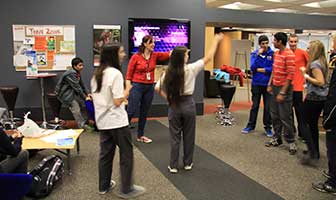 Seminole Branch manager Blodwen Reitz piloted a “Reading Connection” program of free tutoring to children and adults.   A “Juvenile Literacy Program” began in the summer of 1997 as a summer program, and expanded with funding for year-round programs.  It was renamed the Book Buddy program.  A Book Buddy was an adult reader, who had undergone a screening program, and committed to meet at least once a week with a child to read.  The Book Buddy program is still offered by the Windsor Public Library.