The Windsor Symphony Orchestra has supported three major aspects of education: in schools, both elementary and secondary, with young musicians working towards a profession in music, and promoting music education to the public and music professionals.

As far back as 1926, people involved with orchestra groups in Windsor were also involved in bringing quality music education to schools.  Detroit was the centre for a Music Supervisors’ National Conference that year, featuring Windsor musicians and conductor H. Whorlow Bull.

The WSO and volunteers announced their intentions to provide scholarships for young musicians and cooperate with local schools after incorporation in 1949.  The WSO still arranges curriculum-based study guides for school use, providing background about the orchestra, the composers and music, all leading to weekday school concerts by the orchestra in the springtime.  In the early days, these were completed with hours of preparation including research, writing, sourcing illustrations and music by volunteers such as Mary O’Neil and Jane Buttery.  Now, one of the WSO musicians, oboe player Faith Schofield is the Education Coordinator for the WSO. 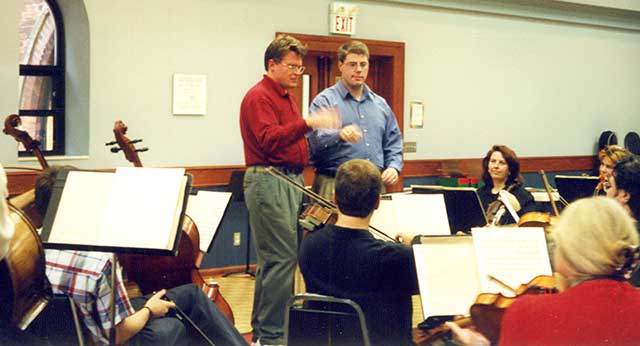 WSO musicians have also performed concerts in schools, and conductors including Susan Haig (who gamely spoke French when visiting francophone schools), John Morris Russell and Peter Wiebe have visited classrooms to teach conducting techniques in the classroom.  In 2008, WSO staff helped to rehearse music students for an ensemble concert of Dvorak’s Symphony in # 9 in E major “From the New World.” In 2010, a massed orchestra playing the music of Gustav Holst at the Windsor Armories in a “One Community – One Symphony” concerts, with orchestras from seven area schools from all School Boards.

Occasionally, the WSO has been able to arrange unique opportunities for school children to watch dress rehearsals of performances that would not be available to them otherwise.  In January, 1988, students were able to watch the dress rehearsal of Puccini’s La Boheme by the WSO and the Michigan Opera Theatre.  John Morris Russell also invited a literacy class to a rehearsal of Beethoven’s Ninth Symphony in 2005.  The students had been studying the words and music of the Beethoven biography for children, Beethoven Lives Upstairs.

The WSO has worked in partnership with area music schools to train young musicians, such as the Ursuline School of Music in the past and Académie Ste Cécile today.  Students from these schools were even invited to be guest artists and soloists with the orchestra.  The community welcomed this approach: “In presenting Miss Barbara Craig, 17-year-old Windsor concert pianist, Matti Holli, orchestra conductor, performed a fine civic duty in furthering this promising artist’s career” (Windsor Star, April 21, 1952).

Private and public music teachers have benefitted from WSO educational outreach, including conducting workshops.  Occasionally, internationally-recognized artists such as Italian-Canadian Emilia Cundari, who sang on the opera stages of Europe, then retired from touring to settle in Windsor and teach in Detroit.  She performed with the WSO in 1970, providing her an opportunity to maintain her performing skills. The WSO has also sourced funding to provide conductor- and composer-in-residence programmes for young professionals, such as Assistant Conductor Sarah John, and Chorusmaster Jeffrey Douma for whom the WSO requested tuition for him to be able to guest-conduct spring educational concerts.

The WSO frequently connects with post-secondary education at the School of Music, and Faculty of Education at the University of Windsor.  Many WSO musicians are professors, and the orchestra musicians partnered with the University’s Music Therapy students to provide practical experience in area hospitals and nursing homes.

The public has benefitted from WSO educational outreach by providing background information about music selections to be played at upcoming concerts.  Dr. Edward Kovarik from the University of Windsor conducted free lunchtime “Concert Previews” in the 1980s.   The WSO still offers pre-concert talks before concerts throughout each season.

Youth orchestras through the years formed a kind of “farm team” for the WSO.  In 1957, a Windsor Junior Symphony was performing, overseen by conductor Matti Holli, and in 1966, the International Youth Symphony was formed by Holli. This was a unique opportunity for this border region (see also Detroit).  After Holli’s death in 1977, WSO board member Bruce Curry took over the 85 young musicians in the International Youth Symphony’s scheduled concert.

In 1988, Holli’s wife Delores oversaw the International Youth Symphony, which had to be disbanded as she had challenges finding strong string players from area schools.  The 55 musicians were absorbed into the Windsor Community Orchestra, led by music professor Jim Tamburini.   The late Margaret Krause, a WSO cellist and general manager of the WSO for a time, was praised after death in 2006 for bridging this gap by forming Windsor Strings in 1988, based at Académie Ste Cécile where she also taught cello and piano.

Thanks to these founding efforts, WSO conductors John Morris Russell and Peter Wiebe were able to draw on a wide pool of talent to form the Windsor Symphony Youth Orchestra (WSYO) and Windsor Symphony Junior Youth Orchestra (WSJYO) in 2004.   The WSYO features students aged from 13 to 22 from all over Windsor and Essex County and gives them valuable experience playing as an ensemble, learning the discipline of a professional musician, and of course, a creative outlet.   They played their first full concert on June 16, 2005 at Walkerville Collegiate, bringing the WSO full circle from one of their earliest venues. The WSYO takes part in an annual Side-by-Side concert with the WSO, which began with a concert at the Windsor Armouries in April, 2008.  The group has also toured to the Association des orchestres de jeunes du Québec festival in 2012.  Every two years, the WSYO participates in the “One Community – One Symphony” Project which also involves local high school groups.  All students study a long piece of music in-depth, and are brought together for the performance.

Fundraising efforts for both groups continue through the year.  WSYO musicians volunteer at the concession stand at WSO concerts to raise money.  In 2009 and 2010, Pannini Palooza fundraisers were held at a local Italian club, with appearances by local celebrities such as Windsor Olympic hockey gold-medalist Meghan Agosta and was sponsored by Sun Life Financial.

The WSYO and WSJYO are conducted by Peter Wiebe with Gloria Zhang as Concertmaster and have about 100 musicians in the roster.