The opening of a public library in Windsor was a modern advancement in 1894.  The Windsor Public Library initially offered books, magazine, periodicals, reference works and a reading room to use the collection.

The move to a much larger facility, the Carnegie Library in 1903, permitted services other than lending reading material.  The WPL invited professors from Toronto to conduct a series of lectures for entertainment and instruction.  The admission was 15 cents for each lecture or 40 cents for an entire course. The lectures proved popular and were continued for years.

As the library developed, cultural events such as literary evenings, performances of recorded music and art exhibits were held regularly for the community.  As part of its cultural responsibility, the Windsor Public Library offered the auditorium (with a seating capacity of 300), and other library spaces for community and social groups for meetings. The Windsor Literary and Scientific Society held weekly reading circles and the Essex Historical Society also met regularly at the library.

In the early 1920s, the library obtained a dozen paintings representative of the work of Canadian artists from the National Gallery. The art work was hung on the walls of the Reading Room at Carnegie Library and drew considerable interest from customers and visitors.

Throughout the 1930s and 1940s, development and growth in Windsor required the expansion and introduction of many new library services.  The WPL Board equipped and opened the art gallery at Willistead Manor, record and film collections were established and branch libraries began to service the community.

The art gallery offered a variety of cultural activities including art classes, art demonstrations, a picture lending collection and exhibition of Windsor’s art collection.  These new services were very popular and added to the cultural and educational amenities of the community.

As technology advanced and the number of Windsor residents purchasing record players increased in the late 1940s, events of playing recorded music decreased but loans of records increased. Shows of 16 mm films replaced the evenings of recorded music. Librarians kept abreast of the current “moving pictures” (films) for education and historical significance to add to the library collection.

Throughout the 1950s, the WPL continued to enable the goals of many cultural groups including the Pilot Club, Windsor Art Association, Windsor and District Film Council, Windsor Theatre Guild, the Windsor branch of Royal Astronomical Society of Canada and Junior Chamber of Commerce.  The art gallery expanded to include adult art workshops, a junior art association and gallery space for the art work in the loan collection.  Curator-director Kenneth Saltmarche continued to arrange exhibitions, give gallery tours and encourage knowledge and understanding of the paintings, prints, sculptures and industrial art that made up the gallery’s works.   The Art Gallery took over its own governance in 1958 and moved out of the Windsor Public Library property at Willistead Manor and into its own building in 1975.

When the new Main Library opened, it once again dedicated space to exhibits and provided permanent space for collected art. The Library Planning Committee featured an Arts Liaison and Selection Committee headed by Art Gallery of Windsor Curator, Kenneth Saltmarche.  This committee staged a contest for artwork – murals –  to be included in the new building, and called for marquettes (smaller versions of murals to demonstrate what a larger version would look like) to be submitted.  Six winners were chosen, including local artist Joseph de Angelis who produced the wooden relief sculpture by the elevator in the Lower Level. Other winners included: Tony Tascona of Winnipeg; Ed Drahancuk of Bragg Creek, Alberta; Fran Mikuska of Winnipeg; and Joseph Calleja and Ray Cattell of Toronto.

A framed print collection for borrowing was another new feature of the spacious, new library. The Main Library set aside space for local artists to exhibit their work at no charge and allowed emerging artists to develop awareness of their art in the community.

The new library had ample space for an auditorium, language centre, and film centre.  On the main floor, the Main Library was unique in the establishment of a Bookstore.  In March 1973, the WPL Board entered into an agreement with Information Canada and the Ministry of Government Services of Ontario to set up a government publications bookstore at the new library.  The first manager was Reginald P. La Marre. This was the only such store outside of Toronto and by 1984, the Bookstore grossed $67,000 in sales of government books, maps and charts. The Bookstore closed in the 1990s, with the advance of digitization the government departments centralized their sale of publications from Toronto.

The Windsor Public Library was designated a full depository library for the Social Sciences Division in 1989.  This section can provide statistical information and copies of federal and provincial government publications from the 1900s.  An Arts and Recreation section accumulated an extensive collection of sheet music and scores available to local musicians and other interested customers.

The Windsor Public Library has also welcomed live music and dance performances to its various branches, including performances by the Windsor Symphony Orchestra’s musicians.  “Peanut Butter n’ Jam” concerts for two to five-year-olds are regularly held in branches, providing easier access for families to see live productions.  Many multi-cultural groups also stage performances and holiday celebrations in various branches, not only providing low-cost entertainment and access to cultural events for new Canadians, but showcasing their artistic talents.

The Main Library also had the space to accommodate a large collection of VHS tapes in its Film Centre, adding to the 16mm film collection.

Appropriate for the industrial culture of Windsor, a privately-donated Automotive History Collection contains hundreds of copies of manufacturers’ brochures on all types of vehicles and even shop manuals dating from the 1940s.

The Windsor Public Library has a long history of community partnerships, and one of the most fruitful is the long partnership with BookFest Windsor.  Held annually since 2002, it was first known as The Windsor Festival of the Book.  With main events held at the Capitol Theatre or the Art Gallery of Windsor, BookFest Windsor hosts some of the best writers in Canada and abroad in an annual three-day festival. 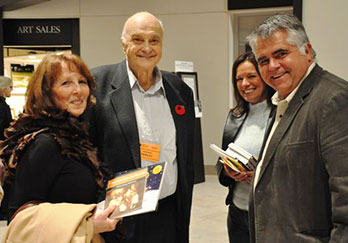 In 2004, the Windsor Public Library and the University of Windsor became partners with BookFest Windsor.  The Windsor Public Library and the staff’s Union, CUPE 2067 have sponsored various visiting BookFest Windsor authors from across Canada and the United States.  Featured authors include Governor General’s Award-winning Leamington native Nino Ricci, mystery writer Louise Penny and journalist Noah Richler, who praised the festival’s cooperative nature and cultural atmosphere in Windsor. Because of BookFest Windsor, the Windsor Public Library was able to invite children’s authors from the region such as Christopher Paul Curtis, and from across Canada, such as Susan Juby, Drew Hayden Taylor, and Martha Brooks to conduct special presentations to school groups at various branches of the WPL.

Windsor Reads, a week long event organized by BookFest Windsor celebrated one book with a connection to Windsor, and was held annually with the assistance of the Windsor Public Library.   In 2011, the WPL hosted a unique – and very Windsor – reading of Windsor’s Alexander MacLeod’s Light Lifting by his father, acclaimed novelist Alistair MacLeod at Devonshire Mall during Library Week.

Graphic Novels are represented at BookFest Windsor with presentations in partnership with both the WPL and Art Gallery of Windsor. Public Service Librarians were able to connect graphic novel authors and artists to the Teen Zone program at the Central (Main Branch).  At the 2012 BookFest, author Richard Scarsbrook conducted a presentation at the Central Branch’s Self-Publishing Lab.

The Windsor Public Library’s Self-Publishing Lab also allows authors to design and print their own books for various reasons for a nominal fee.  In 2012, 91 books were published, and further revenue was derived from electronic scanning services. The Windsor Public Library can now work in partnership with established local authors who conduct workshops in writing and publishing. 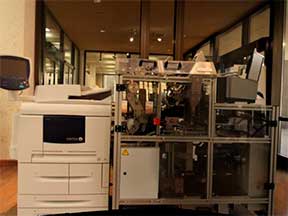 The Self-Publishing Lab’s Espresso Book Machine is able to print book pages and covers, and bind them with a straight “perfect bound” technique. The Facilitator also connects with writers’ groups throughout Windsor and Essex County as a guest speaker at various events.

The Windsor Public Library, led by Jean Foster, Director of Community Development & Partnerships, has obtained several grants in order to assist local cultural and heritage groups in establishing a web-based presence.  In this way, history and information is recorded by project staff and updated by the Windsor Public Library staff in order to both preserve the heritage of these groups and to inform the public about Windsor’s historical and multicultural assets.   The “Digital Exhibits” are linked to the Windsor Public Library’s website. These include the “Windsor Mosaic” series which highlight multicultural and heritage sites such as the Veterans Memories and Cultural Engines sites.