The Art Gallery of Windsor has won numerous awards for curatorial projects in catalogue design, curatorial writing and education from the Ontario Association of Art Galleries (OAAG).  The OAAG is a registered charitable organization that supports and represents Ontario’s public art galleries.  The OAAG winners are chosen yearly by professional peers, and the awards recognize artistic merit and excellence in nine categories.

Noted past awards include the Colleague Award given to Paddy O’Brien (Oakville Galleries / Museum London / Art Gallery of Windsor), the Partners Award, given to Ron Ianni, the Curatorial Writing Award was given to Jessica Bradley for her essay in the catalogue accompanying the Betty Goodwin: Signs of Life show. That catalogue, produced by Judith Poirier for Windsor and the National Gallery also won an award for its design, and an Educators’ Award was given to Christine Goodchild for a workshop for students from the Adult Learning Centre. Catharine Mastin was awarded the 1993 and 1995 OAAG curatorial writing awards for projects on Wyndham Lewis and representations of First Peoples in Canadian Art.

The Art Gallery of Windsor (AGW) has published often on its exhibitions throughout its history. Publications complement the exhibitions by offering such content as documentation of the exhibit; photographic and pictures and descriptions of the pieces on display, an explanation the context of the work, and insight into the creative process.

Historically, the AGW has published between two and six catalogues annually. Catalogues are often the only record of an exhibition once it is disassembled.  A wide range of artists and media are represented. One of the AGW’s significant publications was about a British modernist artist, Wyndham Lewis.  The multi-authored volume entitled “The Talented Intruder: Wyndham Lewis in Canada, 1939 – 1945” is not only of interest to Windsor art lovers, but is used as a reference for art historians and other academics.

The AGW has also published on the work of local artists such as Paul Vasey (The Age of the Cities, 1997), Marty Gervais (A Show of Hands, 2004) and Andrew Foot’s A Guide to Modern Architecture in Windsor 1940 – 1970, whose photographic images are a reminder of Windsor’s past.

More recently the AGW has embarked on a new chapter of publishing history by producing electronic publications. Launched in 2011, this initiative enables art enthusiasts, collectors and visitors to access available catalogues online. The AGW’s e-publications include Female Self-Representation and the Public Trust: Mary E. Wrinch and the AGW Collection, the 2011 AGW Biennail, Joseph Hubbard: You Don’t Know What You Are Seeing (Romancing the Gallery) and John Scott: Mean Machines.

1936 – The Windsor Art Association was formed to promote the arts, arrange art exhibits and work toward opening a permanent art gallery in Windsor. 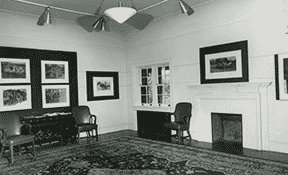 1943 – The north bedroom on the second floor of Willistead was renovated for an art gallery.

1953 – The Women’s Committee of volunteers was formed.

1956 – The major Lawren Harris painting, A Side Street was given by the Detroit Institute of Art.

1958 –The art collection was moved into storage over tensions between the library and the Windsor Art Association.

1959 – In an agreement between the Library Board and the Art Association, an independent institution was formed, the Willistead Art Gallery of Windsor.

1970 – The art gallery identified that the accommodations in Willistead Manor will not be sufficient to serve the Windsor’s future needs.

1985 – Director Kenneth Saltmarche retired after 39 years at the AGW, having built an impressive collection and wide support in the community.

1993 – Nataley Nagy was appointed the third Director, and with the Board worked towards the agreement to rent the building to the Ontario Casino Corporation to establish Ontario’s first casino. The Art Gallery temporarily relocated to Devonshire Mall.

2010 – Catharine Mastin was appointed the sixth director of the AGW.

2011 – The City of Windsor began negotiations with the AGW Board of Directors to partner in creating a shared community cultural space and made public an offer to purchase the building and develop a long-term lease agreement.

2012 – The AGW Board of Directors completed the 49-year lease and purchase agreements related to the acquisition of 401 Riverside Drive West by the City of Windsor.