In some media, the Windsor Symphony Orchestra has been wrongly put down as a “pretty good orchestra for a small lunch bucket city,” but in reality, the region has a high standard of culture, and the Windsor Symphony Orchestra has more than lived up to those standards. The evidence is both in the popularity of the WSO, and in national recognition of nominations and awards. 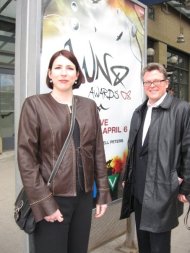 In 2001, the Globe and Mail reported on the remarkable achievement of the WSO recovering from a long financial crisis, citing Mina Grossman-Ianni’s management and the orchestra’s winning a prestigious Ontario Lieutenant-Governor’s Award in 2001. The WSO received a $35,000 cheque and many accolades from fellow professionals. (Michael Posner, “Back from the brink” November 28, 2001. Travelling from strength to strength, the WSO won the award again in 2003.

In 2004, the WSO had made outstanding performances and recordings on the Canadian Broadcasting Company (CBC)’s Radio 2 and on CBC television.  These caught the attention of the industry, and the WSO was nominated for a Gemini Award. In 2007, the orchestra won the Vida Peene Fund – Orchestra Award from the Ontario Arts Council. America may have its Grammys, but in Canada, the Junos are the popular music awards, and in 2008, the WSO received a nomination for its CD album, Peter and the Wolf & Last Minute Lulu.

Various maestri have won their own awards in music, but Conductor Emeritus John Morris Russell achieved community recognition not only with his nomination as the WSO’s first of that title, but with the community at large with the Multicultural Council’s Herb Gray Harmony Award for his work with the orchestra in the wider community.

Without broadcasts by local and later national radio and television, it is doubtful that the Windsor Symphony Orchestra would have been able to continue its long performance history and professional standing. The first conductor of the incorporated orchestra, Matti Holli had a long career as a radio musician and band leader long before he took over the WSO, as did a few of its musicians, such as Celia Hardcastle: “We had one string group that was featured on the Mutual Network and then in the early days, of course, …pop orchestras at CKLW and also later at CBE, and its predecessor CRCW” (Windsor Star, October 28. 1972).  The station maintained a studio orchestra of up to 20 musicians and according to a journalist quoting Holli, that group became the core for the orchestra that Holli set up…” (John Laycock, Windsor Star, January 31, 1976.)  When the orchestra was formed, it is highly likely that Holli was able to use his connections with the local radio stations to broadcast concerts.  The income from these sponsorships and broadcast rights provided key funding for the organization through the years. (Harry van Vugt, Windsor Star, October 4, 1969).

The earliest radio stations in the area came on the scene in Detroit (1920) and Windsor about 1932 (Windsor Star, February 5, 2011), and they were keen to take advantage of programming provided by local musicians.  In the early days, there were two radio stations based in Windsor, CKLW and CBE or CRCW) later to become the Canadian Broadcasting Corporation (CBC).  Broadcasts on CKLW-FM began in 1948, and both radio stations broadcasted all 11 concerts for that season, an arrangement that Holli later described as “rather unique … as far as orchestras are concerned” (Windsor Star, December 31, 1970). Concerts were recorded from the Tivoli Theatre in the early 1950’s, although often only half the concert was broadcast. Local radio stations also helped the orchestra celebrate milestones, such at the Silver Anniversary live broadcast with CKLW and a summary of the history of the orchestra.  The gala included a tribute to Holli’s service, and featured local soprano Jeannine Morand.

The orchestra has been featured on national radio more recently, including “Music Around Us” recorded at the Glenn Gould studio at the CBC Broadcasting Centre in 1993, featuring a composition by 19 year-old Jason Grossi.  The WSO has been featured in at least 17 concerts on CBC Radio Two. On television, the WSO was on CBC’s Opening Night series, with an award-winning performance of a Cross-Canada Christmas special.  The orchestra and soloists Eugene Nakamura, violinist, and Darrett Zusko on piano were recorded at Windsor’s Assumption Chapel in 2003.

The Windsor Symphony Orchestra has recorded several soundtracks to great critical and popular acclaim.  Recordings are expensive undertakings without a recording contract, and the WSO has relied on public, corporate and private funding to produce them.  These archives demonstrate the quality of the orchestra nationally and internationally. Under the directorship of Laszlo Gati in 1983, the WSO recorded Rudy Plays Rachmaninoff with Michael Rudy performing piano solos, with Laszlo Gati conducting Rachmaninov Piano Concerto no. 3, op. 30. With Windsor soprano Peggy Dwyer, conductor Susan Haig initiated the WSO’s first CD recording, Mozart’s Symphony no. 33 – Magic Flute Overture – Vorrei Speigarvi; Haydn, Symphony no. 82 in 1999.

The WSO’s most recent recording reflects a key focus of the organization, music for children.  Peter and the Wolf & Last Minute Lulu (2006) were narrated by Windsor native, Colm Feore, and local author Christopher Paul Curtis, who wrote the text for “Last Minute Lulu.”  The review enthused, “[Feore’s] sense of timing and trained voice make the most of the tale.” (Windsor Star, November 25, 2006).

The music for “Last Minute Lulu” was composed by Brent Lee, of the University of Windsor’s School of Music.  The reviewer continued, “Lee’s delightful score features the same instrumentation as Peter and the Wolf, so orchestras can perform both on the same program” (Windsor Star, November 25, 2006).  This recording was nominated for a Juno award in Canada.

In 2005, the WSO was featured in an independent documentary about the preparation and staging of a concert in 2005, called Clearly Symphony.  In it, orchestra members and conductor John Morris Russell are interviewed as they rehearse Beethoven’s 5th Symphony, Four Songs by Strauss, with soprano Peggy Dwyer, and a new composition by Brent Lee.  Available at the library or from Suede Productions, the DVD is a fascinating behind-the-scenes look at the work of an orchestra.

Symphronica, an exciting suite of new music composed by jazz pianist Ron Davis was recorded with Davis’ band and the WSO under John Morris Russell in January, 2012.

Publications by and about the Windsor Symphony Orchestra

At least one book and several published periodicals and programmes have supported the great work and told the story of the Windsor Symphony Orchestra. The Windsor Symphony Orchestra has left a legacy of its own story told through programmes published professionally for each concert.  Orchestra programmes often provide background and biographies of solo artists and conductors, and background about the music played, and a list of music played at each concert.  Even the advertisers who support the orchestra and programme printing with their sponsorship provide a context for the history of the community of Windsor-Essex region.  Past programmes for the WSO can be seen in the Windsor Public Library archives (Windsor Municipal Archives, MS 34) and on request from the WSO communications office. The WSO produced its own periodicals on and off over the years as funds allowed.  Quarter Notes: A Newsletter from the Windsor Symphony or QN as it was also known began its modern incarnation in 1986.  The format then was quite simple – one colour on regular print. Windsor journalist Gene Sasso, noted improvements to the WSO’s outreach: “Other education-related enhancements include a new quarterly programme magazine that will compile concert notes and information about the symphony and its guests” (Windsor This Month, September 1989).   Quarter Notes upgraded to a glossy magazine format by the 1990’s, but costs became prohibitive, and the paper publication was halted in the 2000’s.   Keeping in Tune: Newsletter of the Windsor Symphony was another informal publication from about 1993-1997.  These newsletters pay tribute to the WSO’s support organizations, the Windsor Symphony Society, the Windsor Symphony League and the Boards of Directors by highlighting the many fundraising events that were organised on behalf of the WSO.

For the WSO’s 50th Anniversary in 1997, the organization produced a combined souvenir programme and history, Windsor Symphony 1947 – 1997: Celebrating 50 years of music.  With interviews, anecdotes and information from the Windsor Public Library Archives, the publication to announce the 50th season’s performances is a celebration of the musicians and volunteers whose hard work and passion carried the Windsor Symphony Orchestra to the present era.  Many of those involved then are still passionate about the orchestra today.   The book can be found at the WSO office or the Windsor Public Library. Now, of course, much of that information is sought and constantly updated on the WSO’s informative website, , and on social media.

Harrow, Ontario author and educator Jane Buttery gained an insight into the work of the Windsor Symphony Orchestra and conductor Susan Haig as an educational volunteer.  As a writer, she was then inspired to tell the story of the WSO and its musicians to celebrate the 50th Anniversary Season of the orchestra in 1998.  The book, Portraits of an Orchestra: featuring the Musicians of the Windsor Symphony provides in-depth interviews with the permanent orchestra members at the time, their training, and even family life as musicians.  Conductor and Music Director Susan Haig is also featured providing inspiration for young musicians.  Portraits of an Orchestra also shares educational information about the structure of an orchestra.

1948 – Name of orchestra changed to Windsor Symphony Orchestra, and incorporation of the group as a non-profit organisation complete 1979 – Laszlo Gati is selected as the WSO’s conductor

1997 – WSO celebrates its 50th Anniversary, with Susan Haig as conductor and artistic director

2012 – WSO finds a new home at the renovated Capitol Theatre