Andrew Braid, the secretary of the WPL Board, was the catalyst in securing funding for the construction of the Carnegie Library.  It was Braid, who in 1900 began writing to Andrew Carnegie requesting funding to build a library.  Through his persistence, and after over a year of correspondence, Braid convinced Carnegie to fund a library in Windsor. Braid served on the library board for 25 years. In 1921, Alicia Mason, the principal of Cameron Avenue School was the first woman on the Windsor Public Library board. Since that time, women have served on the board in a variety of positions, notably Mrs. Gordon Kerr, who was a board member from 1936 – 1966, including serving six times as Chair of the Board.

William Kay was the first librarian of the Windsor Public Library when the library and reading room opened in 1894.  He took his job very seriously and reported to the board: “It has been said that a public library is the people’s university.  It is our wish that the people of Windsor may regard ours as such and may take increasing interest in it and make the fullest use of it.” (William Kay, WPL Annual Report, 1894)  A trained teacher, Kay preferred to work as a librarian and remained in the post until his death in 1902.

Marcelle Frebault was hired at Walkerville Library in 1918 and was succeeded by Anne Hume the following year.  At the Windsor library that year, Miss Agnes Lancefield was appointed librarian, the first trained professional to hold the position.  In 1924, Helen Langford successfully completed studies at the Ontario Library School, bringing the library’s number of professionally trained librarians to two. Read more…

During the first years of the establishment of the Windsor Public Library, children under 16 were not even allowed in the library.  A great deal of discussion involved lowering this bar to the age of 14 in 1919.  Since then, librarians at the Windsor Public Library worked tirelessly to educate children about books, reading, literacy and research, but emphasized the importance of sharing the joy of reading with children. A story hour had begun as early as 1918 at the Willistead Branch, with the Windsor library following suit the next year.  Hilda Rankin was appointed the first children’s librarian in 1919. In 1932, lack of space forced the children’s library at the Carnegie Branch to move to an exclusive space for children’s books at the John Richardson Library Branch.

Subsequently, other children’s branches were established as in elementary schools.  By 1954, the board room at Willistead had been turned into a children’s library.  Services for children at that time included, “clubs for children, including a girls’ poetry club, plays by youngsters, dolls and dollhouses, marionettes and schoolroom visits for book talks” (WPL Annual Report, 1954).  Pre-school-aged children had their own story hours at the Hugh Beaton and Seminole Branches. Read more…

The Windsor Public Library has always supported new immigrants to Canada and encouraged its customers to celebrate their diverse heritages. By the end of the 1940s, the library partnered with the Education Council to provide naturalization citizenship classes, offering free use of films, books and librarians to speak on what the library could offer new Canadians. 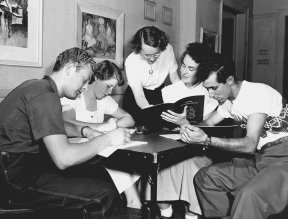 In May 1960, the editor of the Malta News, George Bonavia was invited by the WPL to set up a series of displays at the Carnegie Branch.  This “International Rendezvous at the Library” helped customers discover new cultures connected with Windsor residents. Later that year, the WPL organized a film series scheduled through the winter of displays with photographs, pictures and books, film nights and slide shows.  In November 1960, Norway was the featured country, and the 1960-61 season’s selection of films included Poland, Ukraine, Lebanon, Russia and China. Read more…

As with all cultural organizations in Windsor, the Windsor Public Library has benefitted from the extraordinary generosity and hard work of its supporters.  In order to establish resources and programs in all branches, even those not receiving public funding, library customers have filled in the gaps.  In 1925, a Friends of the Library group was organized after a community meeting where Windsorites showed great interest and concern for the WPL.Friends of the Library groups were formed to support most branches of the WPL.  The volunteers give of their time and plan fundraising and special events to raise fund to improve library services.

The early WPL Board members demonstrated years of dedication to the voluntary work of the Board.  In 1961, two Board members, Maxwell Schott, QC and Mrs. Gordon Kerr were honoured for over 25 years of service to the WPL. After Mrs. Kerr died, a memorial fund for the WPL was established in her honour by her former colleagues as was a similar account in the name of former Chief Librarian Anne Hume.  In the 1969 Annual Report of the Chief Librarian, it was noted that In Memoriam gifts to the library were common as ways to offer support to grieving families and the library.

Unique approaches to fundraising were devised by librarians and board members.  Upset by the disposal of hundreds of out-of-date books from the library collection, Board member Lloyd McLachlan suggested that books be offered to the public in a low-price sale.  The first was held in November, 1977. This allowed low-income customers to own and share books, and became a continued source of funds for new books and materials at the WPL.

In 1994, the WPL Board adopted a policy of encouraging its members, staff and associated volunteers to “exercise creativity in developing mutually beneficial partnerships with both profit-making and non-profit organizations in our community and beyond (WPL Board Minutes, April 7, 1994).  In response, members of the Canadian Union of Public Employees, CUPE 2067, presented equipment for use in children’s programming.   The Friends of the Library at the Seminole Branch raised money for new electronic equipment also that year.  They assisted with programming, outreach for Polish, Spanish and French communities in the neighbourhood and augmented literacy programs for children and adults.  The Friends of Sandwich Library, for example, was led by John Muir and was crucial to the campaign to relocate the Mill Street location of the Sandwich Branch to the new location at Brock Elementary School on Sandwich Street. John Rutherford was also a driving force behind the Friends of Riverside Library which raised funds to defray the cost of construction and furnishing of the new branch building. Another fundraising campaign undertaken in the late 1990s was the “Light the Future … NOW!” initiative.  This campaign raised thousands for books and materials in 1997 and continued for the following few years in order to keep reference materials up to date, especially as new electronic materials increased the cost of the collection.

Local service clubs have also supported the various branches of the WPL.  The Optimist Club of Forest Glade raised thousands of dollars to establish the Forest-Glade Optimist branch of the Windsor Public Library.  For the Riverside Branch, the Windsor East Kiwanis Club donated money for more books for Preschoolers.   In 2010, the Windsor Accessibility Advisory Committee approved a grant to ensure that the doors of the Central Library had push-button access for wheelchair entry and also helped to fund the new elevator for that branch.

Local industries and businesses have also supported specific needs of the WPL. In 2005, Casino Windsor donated a large sum to renovate the Gates Computer Training Lab, plus other education space for the Adult Literacy program, providing new equipment and helping to train staff.

Lectures given by Canadian writers were another way the library board supported authors, as when Canadian journalist and author Madge MacBeth was invited to WPL to speak to customers and visitors.  Among her early works are the novels The Changeling and The Winning Game. 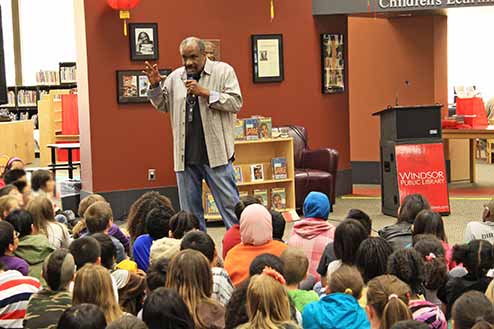 The Windsor Public Library continued to support the work of local authors through its programs, author presentations, readings and purchasing of books. A writer-in-residence program was hosted by the library in 1988, featuring Ann Ireland, author of A Certain Mr. Takahashi, for an extended period of seven months.  Governor General’s Award for Children’s Literature recipient Welwyn Wilton Katz was another Writer-in-Residence in 1990.  Through a week-long series of events, she hosted local writers and children in workshops and presentations.   In 1995, poet and playwright Judith Fitzgerald was writer-in-residence.  As a tribute to Windsor, she wrote an epic long poem, River, about the Detroit River and its history.

One of the longest author “friendships” with the Windsor Public Library belongs to Newbery Medal winning author Christopher Paul Curtis.  In 2001, the WPL nominated Curtis for Windsor’s Mayor’s Award for Excellence in the Arts for his “literary work, community work and inspiration to Windsor’s children and to members of the artistic and African-Canadian communities” (WPL Board Minutes, April 4, 2001).  Curtis’s association in the library began when librarians offered him space and encouragement to write his first best-seller, The Watsons Go to Birmingham – 1963.