The Windsor Symphony Orchestra has partnered with many other forms of artistic expression from dance to visual art and sculpture. The Art Gallery of Windsor (AGW), for example, has enjoyed a long interchange of artistic expression and education with the WSO.  The 2006-2007 WSO season was crafted around a theme of music and art, not only reproducing artwork from the Gallery’s permanent collection in its brochures, but selecting music “painting a vibrant canvas of musical hues and textures,” as John Morris Russell said in 2006.  Windsor artist Shirley Williams was commissioned to provide the cover art for the season brochure. The AGW’s curators, James Patten and Cassandra Getty took part in pre-concert talks and the annual Windsor Canadian Music Festival in February presented five new works inspired by visual artists and their art.

The WSO has performed other visual art-connected concerts, such as chamber music at the Art Gallery of Windsor, and even performed outdoors at the Odette Sculpture Garden, on the banks of the Detroit River in a “Sunsets, Sculptures and Serenades” concert in 1999. Other small concerts have been held at various branches of the Windsor Public Library.  A popular instance today is the “Peanut Butter n’ Jam” concerts held in the Nikola Budimir branch.

Dance is a natural partner of the WSO, and many pops and young people’s concerts have featured professional and student dancers.  The Windsor City Ballet Company directed by Janice Brode took part in the WSO’s 1981 du Maurier Cabaret Series.  In 1994, the WSO played host to Gizella Witkowsky and Serve Lovie from the National Ballet, for whom the orchestra played selections from “The Bartered Bride” by Smetana and selections by Tchaikowski (The Journal, December 1, 1994). 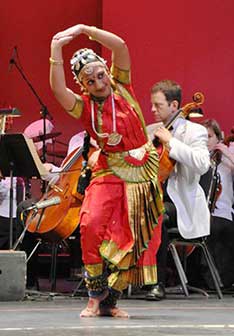 Later that year in a unique performance of music and drama, conductor John Morris Russell arranged an adaptation of Dickens’ A Christmas Carol with local actors from Windsor Light Music Theatre and actor Alan Anderson from Portland, OR.  The 25-minute retelling of the classic Christmas story with words and music was borrowed from a production originating with the Oregon Symphony Orchestra where Russell was a guest conductor.  There was also an unusual guest appearance by tenor Ross Paul, who was better known at the time as the president of the University of Windsor.

The WSO has also supported the literary arts through the years, more recently with the recording of well-known children’s author Christopher Paul Curtis’ adaptation of his own short story, “Last Minute Lulu” which he read to an orchestral music accompaniment. Windsor’s first Poet Laureate, Marty Gervais (who also writes under C.H. Gervais) read poetry commemorating the anniversary of the Bi-Centennial of the War of 1812 at a special concert and city-wide commemoration on September 25, 2012.

The Windsor Symphony Orchestra and Detroit

In terms of Canadian ensembles, the Windsor Symphony Orchestra is unique in its proximity to a much larger American counterpart, the Detroit Symphony Orchestra which is just a twenty-minute drive over the international border.   Rather than being overshadowed by this larger ensemble, the WSO has thrived on a special relationship with American musicians and patrons.

The very origins of the WSO were supported by Detroit musicians and conductors. Peter C. Allan, a founding conductor was able to draw on the expertise of Fred G. Vallance, the associate conductor with the Detroit Symphony Orchestra.  One of local band leader Ernest Rennie’s early groups was called the “Border Cities Orchestra” in order to reflect the towns on the international border, before Sandwich, East Windsor, Walkerville and Windsor were amalgamated. The migration of musicians to and from Detroit was assured.

Reviewers in the Windsor Star often called on conductors, particularly founder Matti Holli, to reflect on the WSO’s relationship with Detroit. In 1969, Holli emphasized the advantages, musing that musicians have the advantage of the larger market for their talents, and students can access a variety of teachers, while still being able to play with the WSO as grounding for their musical development (Windsor Daily Star, September 20, 1969).

The WSO has welcomed guest orchestras and conductors from Detroit through the decades. November 26, 1972 was designated “Symphony Day” to mark the WSO’s 25th Anniversary, and both the WSO and Detroit Symphony Orchestras gave concerts during a landmark day at the Cleary Auditorium.

Guest artists have enjoyed the special relationship between the two cities and performed with the WSO.  Michigan’s Rackham Symphony Choir joined the WSO in 1973.  In 1975, a special celebration of the region’s French and American roots brought guest conductor Andre Ameller from the Dijon Symphony, with Detroit’s Cass Tech High Concert Choir sang Offenbach’s “Neighbours’ Chorus” from La Jolie Parumeuse.

The International Youth Symphony was a truly international initiative founded by Matti Holli in 1966.  Ten years later, 83 members were evenly divided between Canadians and Americans, with rehearsals in Detroit’s Christ Church near the Windsor-Detroit tunnel and performing 6 concerts a year, also split evenly between the two cities.  This group survived a few transformations over the years and is the foundation of the Windsor Youth Symphony Orchestra today.

The Windsor-Detroit Freedom Festival has also benefitted from the help of the WSO as the orchestra staged a fundraising concert, “The Beatles and Beach Boys meet Bach and Beethoven” with Detroit’s Own Teen Angels at the Fox Theatre in 1982.  In 1984, the WSO was commissioned to help stimulate business for the newly opened Hilton International hotel in Windsor with a concert at Orchestra Hall in Detroit to encourage Americans to visit Windsor for concerts and stay overnight at the nearby hotel.

There have been quite a few homages to the Detroit “Motown Sound” through the years. In 2001, the “Detroit! Detroit!” show brought some of Detroit’s  top musicians to sold-out crowds in Windsor and was a highlight of the season.  The General Manager of the WSO, Mina Grossman-Ianni, formed the idea of the program with jazz impresario Hugh Leal.   The guest conductor was American John Morris Russell, then a candidate for the position of WSO conductor.  Guest artists featured master trumpeter Marcus Belgrave and soloist Dee Dee McNeil of Motown Record fame.  The playlist included light classics and orchestral medleys of the music of Stevie Wonder and jazz arrangements of Duke Ellington and Louis Armstrong, “Toward the end of Sunday’s concert, audience members showed their approval by rising spontaneously from their seats and cheering and sing along in a Belgrave-led chorus of When the Saints Go Marching In” (Windsor Star, April 9, 2001).

As Windsor has been known as an industrial city as well as a cultural hub, it is fitting to note the various connections that the Windsor Symphony Orchestra has with local industry.  From the Musician’s union, to the CAW and corporations, the WSO and the public have benefitted from these partnerships.

Most WSO musicians have been members of the American Federation of Musicians, Windsor Local 566 for most of the chapter’s 101-year history.  Celebrating the centennial of the union with an exhibition at Windsor’s Community Museum in 2011, it was noted that the musician’s union is one of the oldest in the city.  The union endorsed the foundation of the WSO, and one of the early names was the “Windsor Federation of Musicians Symphony Orchestra” in 1947.

When she retired from touring as a professional musician, Celia Hardcastle, who as a woman had once been required to get permission to join the union, opened a sheet music store in downtown Windsor that effectively became the de-facto headquarters for the Local 566.  When the WSO hired new musicians, first right of refusal was given to union members before spots were opened to students, although students likely became members in due course.  The union also cooperated with WSO volunteers to steer the orchestra through difficult financial straits in the 1980s.

Conductors Laszlo Gati in the 1980s and Susan Haig in the 1990s attempted to stage concerts in local factories, with varying degrees of success.  Usually, these were small groups of musicians in quartets and quintets.  This didn’t stop the local auto workers’ and other trade unions from supporting the symphony with funds and ticket purchases.

The ultimate union connection occurred in 1998, when Canadian Auto Workers president Ken Lewenza took to the stage with the WSO as narrator of Peter and the Wolf.  Susan Haig, who was a popular speaker at service club and organizations’ meetings, shared with the Windsor & District Labour Council that Lewenza was very qualified for the role, with a “’strong voice … and he speaks with a lot of passion,’” encouraging local union members to feel welcome at WSO concerts (Windsor Star, October 14, 1998).

The WSO relies on corporate support to supplement subscription income. Early sponsorship came from tobacco companies, such as du Maurier, which underwrote a concert series for the 1979-80 season.  Government regulations on cigarette advertising halted this income.  Hiram Walker Distillery (now owned by Beam Global Spirits and Wine) is an example of a corporation that has not only sponsored the WSO, but executives from the firm have also served on the WSO Board.  This allows the WSO to benefit from executive corporate experience.  In turn, the WSO is a drawing-card for Windsor-based development organizations to attract new businesses to culture-rich Windsor.