While Maestro Holli worked to develop the Orchestra itself, and find it a permanent home, his successors also worked to bring the orchestral experience to various venues in Windsor and Essex County for the benefit of those who may not be able to attend concerts in downtown Windsor.

Maestro Gati took orchestra members to play in factories, and to the newly-built popular innovation in shopping, the Devonshire Mall.   In the 1982-83 season, a series of “Music at the Manor” concerts with members of the orchestra who also performed as part of the “Essex Winds, Cartier String Quartet and Border City Brass Quartet going back to Windsor’s artistic roots at Willistead Manor.

In Windsor, some unique venues have included MacKenzie Hall (a former courthouse and jail) for the Largely Canadian series, for example, and when an organ is needed for some music, at the Art Gallery of Windsor, at All Saints’ Church downtown, St. John the Baptist in Amherstburg, St. Anne’s in Tecumseh, Holy Rosary Church and Leamington United Mennonite Church.  The orchestra has reached as far as Chatham at the Mary Webb Centre.  Partnerships with the WSO and communities have been forged, including, in Amherstburg, where the Christmas concert tradition has continued through the years, “When the first notes of the music came alive we heard the Nutcracker and all the favourites we hope to hear at Christmas.” (Patti Helmer, Amherstburg Performing Arts: Celebrating a Perfect Ten: 1981 – 1991, 1991.)

The WSO continues to perform outside of regular concert halls for various events, including locations of the Windsor Public Library, the Nikola Budimir branch and Place Concorde for Peanut Butter n’ Jam concerts, Phog Lounge for the Canadian Music Festival.

Outdoor concerts also prove popular, attracting even more appreciative listeners with riverside concerts in Amherstburg and Windsor’s Sculpture Gardens.   In 2012, the WSO took part in a commemoration of the War of 1812 at Festival Plaza near Dieppe Park, “hundreds flocked to Festival Plaza and enjoyed a full concert that included Holst’s Mars, Bringer of War, Tchaikovsky’s 1812 Overture and much more.” The National Ballet of Canada Conductor Dave Briskin was guest conductor, with sopranos Erin Armstrong and Jackie Robataille, mezzo-soprano Kylee Phillips, and baritone Adam Iannetta. Windsor’s first Poet Laureate, Marty Gervais, read a poem based on local history with the orchestra providing musical accompaniment, and, for the grand finale, members of the Windsor Youth Symphony played percussion, and even the audience took part by being prompted to pop red balloons in place of cannon fire.

The Windsor Symphony Orchestra is recognized throughout Canada and North America for its outreach and contribution to communities.  Not only does the quality of the WSO reflect well on the cultural life of the community, encouraging investment to this region, but its community concerts are, “’absolutely world-beating,” according to Katherine Carleton, executive director of Orchestras Canada, “this is an extraordinarily engaged orchestra. The Windsor symphony really does set the standard for Canadian orchestras.” (Windsor Star, March 11, 2011).

The WSO has also supported other cultural organizations such as a “Willistead Restoration Concert – Pops in the Park.”  Smaller groups have been formed from the core orchestra to perform at charitable events and provide a little extra income for the musicians, such as the Border City Brass Quintet, who performed for Amherstburg Performing Arts in 1982, and the Cartier String Quartet at Willistead Manor (1981).

Click on the image below to view part of the WSO at Leamington United Mennonite Church in 360 degree image.  Click and drag your mouse on the image to view the room. 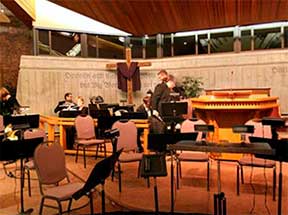 The WSO has connected with many faith communities through the years.   Matti Holli’s ties to sacred music brought members of the WSO to perform a concert at a Lutheran convention at Ford Auditorium in Detroit, MI.  Musicians and conductors took part in the Christian Culture series that ran for decades in the community with concerts at Assumption Chapel, and regular holiday concerts with the Helen Law Singers and the Leamington Choral Society at the Mennonite Church there in the 1970s.  The orchestra has been supported in turn by members of all faiths in the community.

The WSO has also celebrated and supported sports in the community with a “Windsor Salutes Hockey Night in Canada” programme with guest artist John Allan Cameron in 1981.  In 2008, conductor John Morris Russell, created a “Summon the Heroes!” concert as part of the WSO’s Diamond Anniversary Pops series and as a prelude to the Beijing Olympics, featuring Windsor boxer Mary Spencer shadow-boxing to the theme from the movie, “Rocky.”

Reaching out to the music community of course is a priority for the WSO.  In 1972, the WSO hosted the Ontario Federation of Symphony Orchestras Annual Conference in Windsor with a gala concert.  The WSO has supported the “Largely Canadian Series” which highlights Canadian chamber music with outreach concerts at the Art Gallery of Windsor and at All Saints’ Anglican Church, downtown Windsor. Ultimately, the Windsor Symphony Orchestra offers a larger contribution to the Windsor Essex communities by augmenting our quality of life with culture, education and vitality.

The advantage of a symphony orchestra is that the fundamental tools of the trade are timeless, and in a good acoustical environment, need no augmentation for a wonderful musical experience.  The Windsor Symphony Orchestra, however, has been open to various technologies and breakthroughs in music and visual production.

One of the earliest concerts in 1938 featured cutting-edge technology for the time – an electric organ!  Professor Charles Wuerth contributed to the April 23rd programme with selections on the organ on a packed programme featuring soloists, full orchestra pieces, including the “William Tell Overture,” selections from The Student Prince, Faust, The Blue Danube, “Pomp and Circumstance” and more (Windsor Daily Star, April 23, 1938).

Later WSO performances also have taken advantage of newly available technology.  In the 2005 – 2006, season, composer Brent Lee incorporated electronic music and recordings in his compositions and adapted electronica music for the WSO.  He also incorporates computer programs such as GarageBand or Logic Pro in his composition technique. (Windsor Star, February 9, 2006.)  This music was later adapted to be played at the Art Gallery of Windsor.  Lee has also combined electronic media and traditional music as part of the 2010 Windsor Canadian Music Festival, “Music and Media” programme with events held in non-traditional (for the WSO) venues such as Phog, and Milk Coffee Bar in downtown Windsor.

Technology can also be incorporated into a nostalgically-themed programme. In 2007, the WSO staged a screening of Charlie Chaplin’s 1917 classic film, The Immigrant at the Capitol Theatre.  In this performance, then Director of Operations Shannon Whidden worked with Windsor’s Suede Productionsin order to program a time-code with a beta-tape transcription DVD, and Power-Point file on a monitor for Maestro Russell to be able to conduct the score in synchronization with the screen action.  Even the screen was a special type, Cyclorama on loan from the Windsor Light Musical Theatre (Windsor Star, April 12, 2007).

The WSO is on the forefront of making use of the social media networking site, YouTube, during its search for a new conductor and artistic director.  The 2011-12 conductor candidate search committee asked candidates to upload a sample of their conducting skills on YouTube.  This is in place of the practice of candidates having to send in videotapes or DVDs of their performing skills.  “’Maybe we are doing a little pioneering,’” the WSO’s executive director (now Capitol Theatre Managing Director) Jeth Mill was quoted at the time, “’It is an entirely different world than 11 years ago when the symphony searched for the last conductor.” (Windsor Star, February 17, 2012.)

The windsorsymphony.com website, is a key communications tool for the WSO, as are social media sites.  The website launched online ticket sales in 2002 and concert information is available online for the convenience of patrons, helping to connect us all to the music.

Beth Hebert is the Windsor Symphony Orchestra’s long-term librarian and her role is two-fold; to ensure that all musicians taking part in a concert have the music they need in time for rehearsals, and to make sure that all of the sheet music and concert recordings are kept safe.

Sheet music is kept in acid-free boxes in the WSO library and carefully catalogued for easy access.  Photocopies of sheet music are only allowed by copyright to be used at rehearsals, not for performances.

Behind the scenes, every WSO concert is recorded for the WSO library, so that conductors can check earlier performances, musicians can use them for auditions, or the organization can use them for grant applications.  These recordings began on reel-to-reel tape, progressed to cassette tapes, and now compact disks (CD) and digital files.  These recordings are not available to the public for copyright reasons.  See our Recordings chapter for commercial recordings.