Buildings/ Homes through the years

The Windsor Symphony Orchestra has always met the challenge of staging orchestra concerts in creative ways.  In a small city like Windsor, it is not always easy to find the right venue for a full-sized orchestra and audience.

Many early concerts were held in school auditoriums, such as Patterson Collegiate Institute (1854-1973 and demolished in 1979) on Elliott and Goyeau in downtown Windsor.  Another auditorium that was often filled to capacity by eager concert-goers was Walkerville Collegiate Institute, a relatively newer building on Richmond St. in Walkerville built in in 1922.  That school still maintains this musical heritage by housing the Walkerville Centre for the Creative Arts school alongside the high school, and is a regular venue for the Windsor Symphony Youth Orchestra.  The Border Cities Orchestra played at the Knights of Columbus Hall in the early days.

The ornate Tivoli Theatre on Wyandotte Street in Windsor was the WSO’s first long-term home from 1949 – 1958.  The Tivoli, said conductor Matti Holli, was “I think the best, by far acoustically…It seemed to give a tremendously live sound.” (Windsor Star, October 28 1972).   The Tivioli is now the Walkerville Theatre and is waiting for a new owner. The orchestra also performed at the Capitol Theatre on what is now called University Avenue (formerly London Street) for two years, 1959 – 1961.

The rent for these halls was paid first by collecting free-will offerings from the audience, but mainly by fundraising from WSO volunteers and community groups.   WSO office space was usually located in another office location downtown, including the now demolished Norton Palmer Hotel (just across the street from the former Carnegie Library) and on Ouellette Avenue.

In 1961, the Windsor Symphony Orchestra moved to its longest-term home, the newly-constructed Cleary Auditorium on Riverside Drive (later called the Chrysler Theatre and now the St. Clair Centre for the Arts).  As rents would be required more consistently, and were higher, the orchestra had to start to sell admission tickets, which was a shock to regular attendees, and they had to work to rebuild audiences in the new space. There were challenges with this new space, however, and the minutes of a WSO Board meeting in 1982 include a plea from then conductor Laszlo Gati to install an acoustic shell on the stage that would improve the sound.  Audiences might also remember a noisy air flow fan that needed to be switched off during concerts! When the Cleary Hall was renovated in 1991, the Windsor Symphony Orchestra moved back to the smaller Walkerville Collegiate.

Throughout these decades, the Windsor Symphony Orchestra managers and conductors searched for a permanent home for the orchestra.  The organization rented performance and rehearsal space, or used school gyms – in the very early days, Peter C. Allan called musicians to the space above a store on Sandwich Street.  In 2009, conductor John Morris Russell spearheaded a feasibility study to see if the WSO could have a permanent home in the acoustically superior Windsor Armories (Quarter Notes, Fall 2009).  Although Russell’s instincts were correct about the usability of the building, other plans were in place and it is soon to become the new home of the Schools of Music and Visual Arts for the University of Windsor. 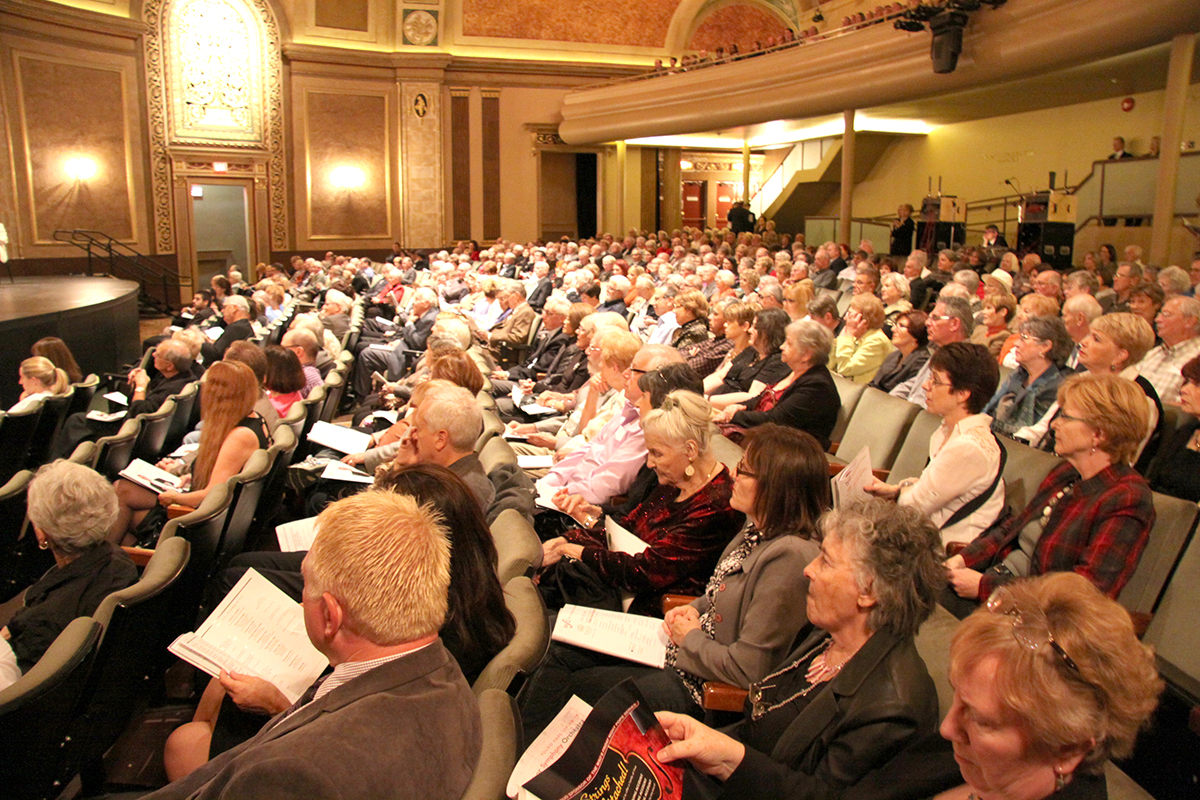 As part of an exciting revitalization of downtown Windsor, the Windsor Symphony Orchestra recently found a new home with an old friend, the Capitol Theatre in the Fall of 2012.  Once one of the largest movie theatres in Canada (and the first to be fitted with air conditioning!), the Capitol Theatre, owned by the City of Windsor, but managed by the WSO, now boasts three welcoming auditoriums for flexible performance options and will be able to consolidate its administration, library, storage and rehearsal space in that one convenient location, plus offer performance space to rent to other arts groups in Windsor.  The largest auditorium, the Pentastar Theatre, has been fitted with a portable wooden acoustic shell to improve acoustics even further. See some of the video links on our website for a celebration of the WSO’s opening weekend in their new home.

While Maestro Holli worked to develop the Orchestra itself, and find it a permanent home, his successors also worked to bring the orchestral experience to various venues in Windsor and Essex County for the benefit of those who may not be able to attend concerts in downtown Windsor.  “This is an orchestra with deep roots in the community,” said John Morris Russell, “Windsor’s strength … is that in addition to the usual menu of classics and pops, …it takes the program to the people ….” (Globe and Mail, November 28, 2001).  Another advantage to the musicians and audience being closer together is that a practice developed by Maestro Bennett, and continued by Maestros Haig and Russell, of providing a short commentary, or introduction to the music to be played.   This practice helps draw in listeners who may otherwise have felt intimidated by an orchestral piece (Windsor Star, January 9, 1992.)  Maestro Haig even began a practice of opening up dress rehearsals of the orchestra at a lower ticket price to benefit students and the public (Windsor Star, November 8, 1991.)

As either a scaled-down version of the orchestra, or orchestra members taking on extra roles in smaller ensembles such as string or wind quartets, or members and conductors offering workshops in schools, the Windsor Symphony Orchestra is unique in its ability to adapt to various venues.  Maestro Gati, for example, took orchestra members to play in factories, and to the newly-built popular innovation in shopping, the Devonshire Mall.   In the 1982-83 season, a series of “Music at the Manor” concerts with members of the orchestra who also performed as part of the “Essex Winds, Cartier String Quartet and Border City Brass Quartet going back to Windsor’s artistic roots at Willistead Manor.

In Windsor, some unique venues have included MacKenzie Hall (a former courthouse and jail) for the Largely Canadian series, for example, and when an organ is needed for some music, at the Art Gallery of Windsor, at All Saints’ Church downtown, St. John the Baptist in Amherstburg, St. Anne’s in Tecumseh, Holy Rosary Church and Leamington United Mennonite Church.  The orchestra has reached as far as Chatham at the Mary Webb Centre.  Partnerships with the WSO and communities have been forged, including, for example, in Amherstburg, where from the 1983 on a Christmas concert tradition has continued through the years, “I would be remiss,” said Amherstburg Performing Arts director Pat Helmer in 1991, “if I didn’t mention the first of our Christmas concerts in the lovely setting … Maestro Laszlo Gati gave us a concert like no other.  …When the first notes of the music came alive we heard the Nutcracker and all the favourites we hope to hear at Christmas.” (Amherstburg Performing Arts: Celebrating a Perfect Ten: 1981 – 1991, 1991.)

The WSO has taken to the road showcasing its excellence beyond Windsor and Essex.  In addition to trips to Toronto for recordings and broadcasts, in the spring of 1987, conductor Dwight Bennett took the WSO to take part in the Pan American Arts Festival preview at the Warren Performing Arts Center in Indianapolis, Indiana.  The orchestra was a cultural ambassador for the City of Windsor, as the City was bidding to host the 1994 Commonwealth Games at the time.  According to reports by Windsor Star arts reporter Harry van Vugt, who followed the WSO on their tour, musicians were high-spirited on the trip (playing a few practical jokes on the reporter), but brought their enthusiasm to the stage before a small, but very appreciative audience (Windsor Star,  May 15, 1987). The WSO continues to perform outside of regular concert halls for various events, including locations of the Windsor Public Library, the Nikola Budimir branch and Place Concorde for Peanut Butter n’ Jam concerts, Phog Lounge for the Canadian Music Festival. 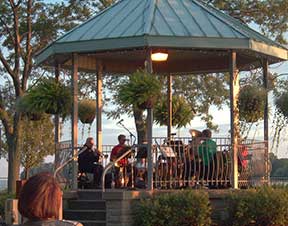 Outdoor concerts also prove popular, attracting even more appreciative listeners with riverside concerts in Amherstburg and Windsor’s Sculpture Gardens.   In 2012, the WSO took part in a commemoration of the War of 1812 at Festival Plaza near Dieppe Park, “hundreds flocked to Festival Plaza and enjoyed a full concert that included Holst’s Mars, Bringer of War, Tchaikovsky’s 1812 Overture and much more.” The National Ballet of Canada Conductor Dave Briskin was guest conductor, with sopranos Erin Armstrong and Jackie Robataille, mezzo-soprano Kylee Phillips, and baritone Adam Iannetta. Windsor’s first Poet Laureate, Marty Gervais, read a poem based on local history with the orchestra providing musical accompaniment, and, for the grand finale, members of the Windsor Youth Symphony played percussion, and even the audience took part by being prompted to pop red balloons in place of cannon fire (City of Windsor website, November, 2012).