Homes Throughout the Years – The Permanent Collection

The Art Gallery of Windsor has had a long history in the community and many homes, beginning in one room of a home in Walkerville and today is housed in a building on Riverside Drive that cost $23 million to construct.  The AGW’s 70-year history of homes throughout the years follows.

The Art Gallery of Windsor’s first and longest standing home was at Willistead Manor, the former home of Edward Walker, son of Hiram Walker.  Completed in 1906, the Elizabethan manor was the centre of Walkerville’s residential area.  Designed by renowned architect Albert Kahn, the Manor, a gatekeeper’s lodge and a coach house are set on a sixteen-acre park and named after Willis Walker, Edward’s brother.  After Edward Walker’s death, his widow Mary donated the Manor and grounds to the Town of Walkerville.

In its early years as a public building, Willistead Manor contained the municipal offices of Walkerville on the first floor and the Walkerville Library on the second floor. The library arranged the first exhibition of art works for Windsor area residents, loaned from the Royal Ontario Museum as early as 1921 and later from the National Gallery.

When Windsor amalgamated with Walkerville in 1935, the Willistead Library continued to use the building and renovated 106 feet of exhibition space for the Willistead Art Gallery of Windsor in 1943. The library administration was moved to the Bartlet House in 1957.  The art gallery was given use of the entire second floor, additional office space on the third floor and a workshop and storage area in the basement which allowed the further development of the Gallery.

With the permanent collection growing but the art gallery limited to 4,500 square feet of space in Willistead, it was clear that an addition was needed or the Art Gallery would have to move to meet the needs of its expanding functions.  There were other problems.  “The building is not fire or burglar proof nor is it temperature or humidity controlled” AGW director Kenneth Saltmarche told the Windsor Star. Additionally, the gallery has been refused valuable collections for display because of these factors. (Windsor Daily Star, 1971) Mr. Saltmarche also asserted that what had made Willistead Manor so impressive was also a disadvantage to the art gallery.  He remarked, “The vast majority of the Windsor public will not visit or make use of its gallery because of the aura of exclusivity which attaches to what was once a splendid private house in what was once a socially exclusive residential area.” (K. Saltmarche, 1980)

In 1970, in an effort to resolve the issue, Mayor Frank Wansbrough suggested the art gallery relocate to an empty brewery warehouse on Riverside Drive west.  Skeptical at first, Saltmarche and the Board of Directors was soon convinced after touring the well-made, spacious facility.

The Carling Breweries Bottling Plant was about 20 years old when it was purchased by the city.  Although it was not initially thought to be an ideal building or location, the repurposing of the industrial building turned out to be a triumph for the art gallery and the city.

The gallery’s Board of Directors received a valuable building and property by accepting the city’s offer, even so, the building required major renovations to be repurposed as an art gallery. Toronto architect David Horne was hired to redesign the 60,000 square foot rectangular red brick warehouse and money was quickly raised through a volunteer fundraising drive in the community with federal and provincial grants for the renovations and redesign.

The renewed AGW opened in September 1975 on Windsor’s downtown riverfront for $2.25 million.  The gallery featured a high ceiling that could be positioned in proportion to pictures hung there. The design was bright, open and airy, had ample display areas and improved visitor services such as the auditorium and a small theatre for films.  The neutral background of the floor and walls complemented the art and an open air terrace off the central foyer on the third floor offered a spectacular view of the city to visitors.  The gallery’s new home also included a freight elevator, loading dock, an up-to-date security system and modern temperature and humidity control system.

The art gallery enjoyed ten years of operations when it was discovered that asbestos had been used for insulation.  It was then closed temporarily in 1986 while the 60,000 square foot gallery interior was emptied and walls and ceilings removed to enable the removal of the asbestos insulation.  Further renovations followed which created new exhibition space, a library and a resource center.  The expansion and redesign of security, the information desk, gift shop and art rental facilities were added to the amenities.

By the early 1990s, the AGW’s aging building, now facing its fourth decade, was facing major upgrades and required substantial maintenance.  It lacked the proper storage area and needed a new roof.  Under the leadership of Director Nataley Nagy, the Board of Directors proposed the art gallery building as a temporary site for Ontario’s first interim casino.  The understanding was that the AGW would vacate the building for three years, forming an endowment formed from the facility rental income and eventually return to a refurbished building.

Considering various options for a temporary location, AGW Director Nataley Nagy and curator Vincent Varga set out to find a new home for the art gallery. “We looked all over town, because I felt it was part of a community-building strategy to do look-sees. We kept coming back to the mall,” said Nagy. (Toledo Blade, July 24, 1994)

The AGW opened in a renovated furniture store at Devonshire Mall in November 1993.  In its first full month at the mall, 12,700 people visited the gallery compared with previous attendance of 33,000 visitors in a year.  At the mall, the AGW was able to connect with and engage many Windsorites for the first time.

The original three-year temporary move was extended on until the casino built its own permanent quarters and vacated the building in 1998.  The AGW Board considered whether to relocate to its riverfront location or build in a different location and, working with city administration and council, eventually decided to return to downtown. The lease of the AGW created a $6.7 million endowment fund and enabled the construction of a $23 million state-of-the-art facility for the AGW’s collection and exhibitions. In 1999, the AGW Board of Directors announced plans to demolish the art gallery and build a new facility near the old location and construction at 401 Riverside started later in the year.

The AGW opened its fourth home at 401 Riverside Drive in February 2001.  The opening exhibit featured Impressionist Masterpieces from the National Gallery of Canada was well-received and attracted audiences from the region and beyond. The three-storey 74,000-square foot building has a framework of glass extended at each end and gives views of Windsor’s downtown and Detroit across the river. The building was described by the architects as “a cultural beacon, designed as an elegant glass form, spans the entire building.” (Reich+Petch/Moffat Kinoshita Architects Inc., 2001)

Only a year after opening, the new building began to present challenges for the AGW: the high-tech climate control system cost more to maintain and utilities rose significantly. To compound matters further, funding from the city and other sources decreased. Throughout the next decade, these problems continued to plague the art gallery, and learning to do more with less became the reality for the gallery staff.

In 2011, the AGW developed the “Green Roof” and Eco Lounge project with support from the Ontario Trillium Foundation and Windsor Family Credit Union.  In its short history this redevelopment has provided valuable new spaces for public programming. The terrace is plant covered, has seating and offers spectacular views of Windsor and Detroit.

On January 4, 2013, the AGW sold and transferred ownership of the 401 Riverside Drive West building to the City of Windsor to further enhance the AGW’s sustainability and support the development of a “Cultural Hub” through a shared tenancy agreement. In a message from the AGW’s President Sean White and Director Catharine Mastin in December 2012, membership was assured  that, “The agreement significantly enhances financial stability for the Gallery and allows us to move forward in our mission to continue providing the city with a Canadian Heritage designated ‘Category A’ art gallery that we can all be proud of.”

In a 49-year gratis lease agreement signed in December 2012, the AGW will remain an independent, distinctly governed organization at the 401 Riverside Drive West building as a tenant on the mezzanine, second and third floors.  Moving forward the gallery can now concentrate on a dynamic exhibition program and develop new and renewed educational and publishing initiatives.

The Art Gallery of Windsor’s permanent collection represents a wide range of Canadian paintings, sculptures, and works on paper from the 19th, 20th and 21st centuries as well as some art from Europe, the USA and Asia.  The Gallery’s collection of over 4,000 objects includes works by Emily Carr, members of the Group of Seven and a selection of Inuit art.  The collection highlights also include contemporary art projects with Stan Douglas, Rita McKeogh and Chris Cran, as well as major acquisitions by founding members of the Royal Canadian Academy. In 2011 the AGW began digitizing the collection.  Progress to date on the digitization can be viewed online at www.agw.ca  and by visiting the gallery to see original works.

The Art Gallery of Windsor’s collection belongs to the AGW and is held in trust for the people of Windsor and Essex County. Works in storage are kept in international museum standards conditions to control light, exposure, humidity and temperature and it is also regularly showcased in long-term and changing exhibitions. Most of the permanent collection has been donated.  Artworks have also been purchased through the financial support of individuals, public and private donors, foundations and corporations exclusively for the acquisition of art.

Click on the image below to view part of the Art Gallery of Windsor’s Permanent Collection in 360 degree image.  Click and drag your mouse to view the entire room. 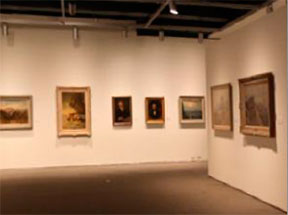 The Art Gallery’s curatorial activities are a reflection of their goals, developed from research and understanding the arts community in Windsor.  These goals include: art practice in Windsor, border culture, urban transformation, gender and feminism, indigenous art practices and the permanent collection. In addition to an impressive exhibition schedule and despite financial constraints, the AGW offers a wide range of educational programs and community outreach services.  Art classes for all ages, workshops and artist lectures are all part of the gallery experience.

Click on the image below to view Martha (Frances Loring) in 360 degree image.  Click and drag your mouse on the sculpture to view from all sides. 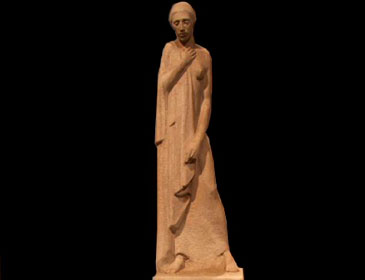 The AGW offers free admission during regular public hours, providing the opportunity to view a wide range of Canadian artwork at one of Ontario’s most significant galleries.  Donations are accepted and will help the AGW continue its high level of programs and services.  There is a fee for special programs, events and activities.  Educational Programming such as Fridays Live! are events featuring studio workshops, reading, tours and performances related to current exhibitions.  The AGW also offers hands-on activities for children, youth, and their families based on current exhibitions.  Special public tours and lectures are offered on the weekends.

The AGW’s Resource Centre includes over 10,000 books and catalogues, with a focus on Canadian art.  Research material is also available to support the gallery’s programming and permanent art collection. The resources are accessible by appointment but can not be removed from the centre.  Gallery staff may borrow materials as needed and docents have material made available to assist them with tours and other programming. 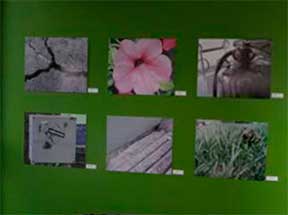