Tourists from the far corners of the world also saw the Windsor story and took it home with them.  Newspaper editors from 35 of the United States toured the Museum.  Through an interpreter, a group from Yokohama was taken back through the thousands of years of Man’s occupancy on the Detroit [River]. (R. Alan Douglas, WPL Annual Report, 1958)

Windsor, Ontario is a key area for the study of the history of First Nations in Canada and America and the first Europeans began to settle in Windsor.  While many museums in Canada have incorporated a library space into their museum site, few public libraries have included a full museum as a branch of its operation.  The François Baby (usually pronounced in the French manner as “bahbee” or “bawbee”) residence is one of the few surviving buildings that has witnessed this rich history.   More detailed histories of the museum exist elsewhere, but a short background is necessary to explain the significance of the property.

Born in the 1760s, local merchant François Baby built a house in 1812 on his farm near the Detroit River, between Pitt and Ferry Streets in Windsor.  Shortly afterwards, the house suffered the occupation of the American army during the War of 1812.  The house was handed down through the generations, became a commercial building, and by the outbreak of World War II, was barely standing amidst urban development in downtown Windsor.   In the early 1940s, local historians, including local community leader, historian and WPL Board member George F. MacDonald, and a recently-formed group called the Windsor Historic Sites Association (WHSA), petitioned the City of Windsor to take control of the home and restore it to its former grandeur and repurpose it as a museum for the benefit of Windsor citizens.  The City passed a motion in June 1945 giving over the operation and maintenance of the Baby House to the Windsor Public Library Board.

Restoration took over a decade. Delays were caused by lack of funds, lack of recognition by the Historic Sites and Monuments Board of Canada, a fire and vandalism.  The community, especially teachers and students, began to support the rescue and restoration of the house and in November, 1947, the Windsor Teachers’ Council formed a “Baby House Drive” Committee.

Local businesses began to support the effort, too, and once again, the Hiram Walker legacy came to the benefit of Windsor’s culture when the distillery company donated $37,000 in 1957 and won naming rights.  According to the WPL Annual Report of 1958, George F. MacDonald donated his entire antique collection, plus hours of time to the project.  Local architects Sheppard and Masson designed the reconstructed house as a museum.

The Hiram Walker Museum was opened in May 7, 1958, by the Hon. A. Kelso Roberts, Attorney-General of Ontario.  Windsor Historic Sites Association formally handed over the building and the historical collection of artifacts from the region to the WPL Board.  The Windsor Public Library Board hired historian R. Alan Douglas to be the first curator of the Hiram Walker Museum.  With one other staff member hired by the WPL, the newest branch of the Windsor Public Library became a great success, adding both archives and objects to the library archives, and also augmenting the library’s visitor numbers.  The curator and staff reported to the Windsor Public Library administration.

The Windsor Public Library quickly embraced the public and academic educational opportunity of having a museum in its “collection” by planning workshop programs of the preservation of museum artifacts for the Ontario Historical Society for 1958 (Globe and Mail, Oct. 7, 1957).  The museum and library staff also benefitted from the help of professional curators from Detroit and Ontario.  By September, 1963, the museum was declared a National Historic Site.

During its first full year of operation, 15,000 guests had toured the Museum, and local residents had scoured their attics and donated hundreds of historical objects, from a textile artist’s magnifying glass to a “pioneer loom in working condition” (Douglas, WPL Annual Report, 1958).

In 1974, the board assisted Alan Douglas in the purchase of a rare water colour painting by Catharine Reynolds of Amherstburg, circa 1812, adding to the Museum’s collection of objects important to local history.  After George MacDonald’s death, Chief Librarian Anne Hume noted in her 1963 report that MacDonald’s collection of antique guns had been donated in his name and a campaign was mounted for more donations from the community, “a specific effort was directed toward the development of an important collection of firearms, suitable for exhibition to a public concerned with the Canadian aspects of local history” and “…truly representative of the various types of weapons that played a part in the settlement of the Detroit River frontier” (Hume, WPL Annual Report, 1960).  Possibly this is one of the few times that a firearms collection has been mentioned in a library annual report.

In March, 1974, the Archivist of Ontario proposed that this Provincial Ministry take microfilm copies of the museum’s fragile manuscripts collection in exchange for a microfilm copy for the museum.  The Board, with the approval of the Windsor Historic Sites Association, also agreed that a large collection of the museum’s archives be “loaned in perpetuity” to the Archives of Ontario in order to ensure the items could be preserved (WPL Board Minutes, March 5, 1974).

The museum’s activities expanded the traditional library mandate further by overseeing the archaeological investigation of five sites of unique importance to the history of First Nations in the area, part of the commemoration of the WPL’s 75th anniversary in 1969.   In March, 1971, further archaeological studies of the area around the museum were conducted with the help of the Royal Ontario Museum and the University of Toronto, and their graduate students carried out the work.

Click on the image below to view part of Windsor’s Community Museum in 360 degree image.  Click and drag your mouse on the image to view the room. 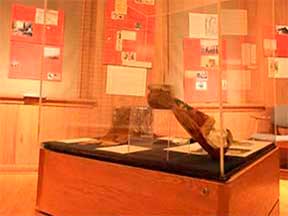 The Museum volunteers and staff continued to promote the research work of the museum, and often produced information to local and national media on Windsor and Canada’s history.  In 1984, Curator Alan Douglas was featured in a series of information broadcasts on local history, which had been very popular, and the Board congratulated him on this success.  Laurence Grant, who succeeded Alan Douglas as Curator, was nominated for the 9th Annual Tourism Award in the Promotional Achievement category, highlighting the library’s unusual involvement in the local tourism industry through its governance of the museum.

In 1982, a Museum Services Committee was struck in order to provide additional governance to the Museum and allow it to be eligible for provincially-funded grants.   A feasibility study was conducted by the library to determine the Museum’s future goals, in 1985 including the role of the curator, the demarcation of the duties of staff and volunteers, and the use of computers in museum work.  The next year, 1985, a new East Gallery was added to the museum, and afterwards, celebrated the history of the Essex Kent Scottish Regiment was celebrated with a special exhibition there. In 1991, a proposal was made for a competition to rename the museum.  It was changed to François Baby House Museum for a few years.

By the start of the new millennium in May, 2000, the Windsor Public Library Board reviewed its governance of the museum. The provincial Community Museum Operating Grant required the WPL to have an appointed or elected governing body that was responsible for the operation of the museum.  The museum branch was overseen by a Museum Committee comprised of two Windsor Public Library Board members, two members of the Windsor Historic Sites Association and two members of the Museum Group with a possible two other members-at-large.

Windsor was also unique in that it did not have a dedicated municipal museum – the original design of the space involved only part of the display being devoted to Windsor history. An area was arranged as a historic house reflecting the building’s original owner.   The museum then contained 15,000 artifacts mainly owned by the Windsor Public Library, the Windsor Historic Sites Association owned the MacDonald Collection – and the WHSA technically also owned the François Baby house.  The annual visitor numbers swelled to over 51,000 including visitors to the interpretation centre.  The François Baby House had 5,660 sq ft, with 1,750 sq ft of exhibition space, and the Duff-Baby Interpretation Centre had 1,000 sq ft.

Click on the image below to view part of Windsor’s Community Museum in 360 degree image.  Click and drag your mouse on the image to view the room. 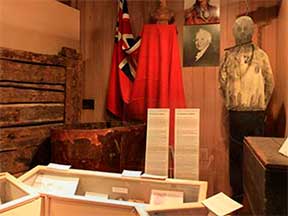 The upkeep and collection of the museum was greatly augmented by the fundraising efforts and volunteers of the Friends of the Museum and Windsor Historic Sites Association.   The Museum Board’s mandate was for visitors to leave with a sense of relationship or connection between, “Windsor and elsewhere; Events and individuals; Objects and People; Ourselves and others”… and that “people will experience inspiration, relaxation and enrichment of their lives through the various heritage services offered by the Windsor Public Library” (WPL Board Minutes, May 10, 2000).

The museum and its volunteers also spearheaded local history celebrations and commemorations, such as the August 14, 1994 commemoration of the Surrender of Detroit in 1812.    This began a tradition of hosting historical re-enactments.  Having costumed interpreters on library property bringing history alive was another departure for the traditional interpretation of a library’s community function.