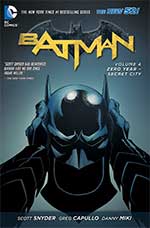 Batman Vol.4 Zero Year – Secret City tells the story of Bruce Wayne and the path that lead him to become Batman and the protector of Gotham. The genre of the book is comic and fiction action/adventure. The book is a collection of issues in the Zero Year series.  The author of the series are Scott Snyder and James Tynion IV with the artwork by Greg Capullo, Danny Miki, and Rafeal Albuquerque.  The series was published by DC Comics and began in June 2013 and ended in July 2014, featuring Batman as the superhero.

The story is meant to redefine the origin of Batman as a fresh story that is unconnected to previous stories of Batman’s origin. Though the story does include the elements that made Bruce Wayne into Batman in Batman: Year One, such as the long absence from Gotham City and the first acts of vigilantism.

The plot begins with Gotham City being destroyed by a flood, and Batman is presumed dead. The first arc of the story titled ‘Secret City’, is set five months before the flood and Bruce Wayne returns to Gotham City after his long absence that made him to be declared dead. He disguises himself and fights Red Hood One, and he finds that there is much to learn when fighting masked criminals that are corrupting Gotham. Bruce noticed that the gang leader never shows his face and his henchmen never show there face to each other.

Afterwards, Bruce meets his maternal uncle, Philip Kane, who asks him to take over Wayne Enterprise that was in Bruce’s name but he declined the offer. In a flashback, Bruce’s father gives him a black orb that can be used to show a three-dimensional map inside a building. Edward Nygma, who is Philip’s strategist for Wayne Enterprise, wants him to kill his nephew, Bruce Wayne, to get public sympathy and avoid a power struggle. When Philip refuses to kill his nephew, Edward takes matters in his own hands and hired the Red Hood Gang to murder Bruce.

Then Bruce disguises himself again, and rescues Oswald Cobblepot from the Red Hood Gang and takes a sample of Red Hood One’s blood, but fails to find the owner. After Bruce’s argument with his butler, Alfred Pennyworth, the butler leaves and Philip calls Bruce to come to Gotham Museum, where Bruce is revealed to the public against his will by his uncle. Then, he walks from the media and meets Nygma for a moment before he escapes from the press that were searching for him.

Bruce goes to his brownstone where he is attacked by the Red Hood Gang. The gang beats Bruce violently and Red Hood One tells him that the death of Bruce’s parents changed him as it did to Bruce. Bruce, who is barely surviving, retreats to Wayne Manor, where Alfred tends his injuries. Bruce uses the camera orb to find the bat filled cave that he had fallen into as a child and he finds his destiny when the camera orb falls and breaks.

‘Dark City’ which is the second story-arc, was about Bruce’s first month as Batman. The story begins with Bruce stopping another Red Hood robbery, and soon learns about the leader’s (Red Hood One) plans. Bruce reveals himself to the media and also the Red Hood Gang’s plan. Bruce states that the gang is planning to rob Ace Chemicals and the gang tries to kill him. Bruce then goes into Ace Chemicals as Batman and begins fighting off the criminals. Philip, who was blackmailed into the gang, tries to shoot Red Hood One, but fails and the gang leader shoots back at Philip and kills him.

At last, Jim Gordon, sergeant of the Gotham Police department shows up with SWAT officers and tries to capture both Red Hood One and Batman. The building turns on fire with all the commotion happening and Red Hood One tries escaping on a helicopter but Batman pulls him back into the building. Then, Batman tries capturing the gang leader but Red Hood One escapes by jumping into a vat of chemicals. Finally, Batman and Alfred study on the gang when Edward Nygma, the Riddler, shuts off the power in Gotham, challenging Batman to turn it back on.

My favourite character in the book was Red Hood One. He wanted to evolve like Bruce did, when he turned into Batman. Red Hood One is the Joker, and falling into the vat of chemicals was how he turned into the psychotic and twisted criminal mastermind he is in the present. I liked how Scott Snyder portrayed Red Hood One in the story and when he told Bruce his motive for crime. The Joker will forever be Batman’s arch-nemesis and the two will have to fight continuously due to Batman’s unbreakable sense of justice and Joker’s instinct for random chaos. The Joker is one of the most iconic characters in popular culture and also one of the greatest comic book villains and fictional character ever created.

My favourite part of the book was when Bruce he had lost all hope of fighting evil and he had to turn to his father for advice. He used the camera orb to find the bat-filled cave that he had fallen into as a kid and he saw a bat as a sign of fate. That was when Batman was born and that was the moment that Gotham City would have a protector that would fight crime at any cost.

The artwork by Greg Capullo and Danny Miki in the book showed their point of view on the city of Gotham with very detailed artwork on the buildings and the general perspective of surroundings when walking in the city. Also, the design for Batman’s first suit was original but included an original bat design on the suit.

In conclusion, the origin story of Batman in this book truly stands out from others and the artwork of Greg Capullo and Danny Miki in the book was fantastic. I would recommend Batman Vol.4 Zero Year – Secret City as a must read for anyone that likes Batman.