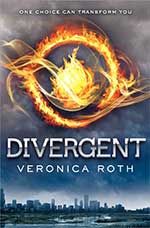 5 stars *****
This science-fiction, action filled, mysterious and romantic book is extremely captivating once someone starts it. I highly suggest you to read this. Even someone who does not like reading will most likely love Divergent and then will probably become addicted after reading the first few pages.

The author, Veronica Roth won the “Goodreads Choice Awards Favourite Book” in 2011. Her writing is very unique and has many deep meanings as it tackles the difficulties of life and the strength of courage. Sixteen year old teen, Beatrice Prior, shows the importance of courage and the significance of being different. At the same time she has to break through many problems on her way in this unique world where everyone is separated into their strengths and what they are categorised as.

Divergent has many lessons people can learn from, such as, the advantages of being unique and how life will go on even in the worst situations. If not better, this book is just as good and meaningful as Veronica Roth’s other books in this series (such as Insurgent).
Veronica Roth competently showed the significance of courage. Beatrice fights for what she believes is wrong, even if it seems like the whole world is against her. This book sets in a unique world different from ours where everything is separated into factions or categories based off the citizens’ strength. Many citizens in this world believe this system is economically right and is the best way to grow the economy. However, Beatrice realises some secrets and the cruelties the “government” of this economy has been doing. She“[believes] […] courage [is] [what] drives one person to stand up for another” (Roth 206) when she was faced in a hopeless situation. Veronica successfully managed to present the important of courage. However, she also added some dark sides to it. The author wanted a character with “a voice that wouldn’t leave [her] alone” (Roth’s Q&A) and someone that had the courage to stand up for what’s right.
Veronica wanted a character that faces “fears head-on” (People’s Celebrity Magazine) since she “dealt with anxiety” (People’s Celebrity Magazine) when she was young. Beatrice Prior is always in the middle of some of the worst problems you can ever imagine. The main character is always trying to fight for justice, but misfortune seems to be more visible as the book continues. Some people who read Divergent may believe Beatrice isn’t morally correct at times, however, it should be considered in account that Beatrice is always cornered to a wall and she has to fight back at times.

Overall, I believe the author of Divergent presented the main character’s problems in a unique way. Veronica Roth successfully brought out courage and the difficulties of life in Divergent. This is one of the best books I have ever read. It is very addicting and I highly suggest you to read it!

Like this review? Place a hold on one of our copies here.