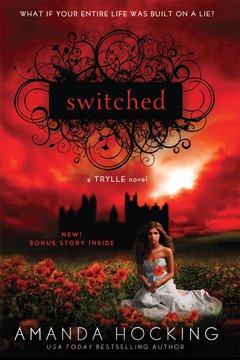 “When Wendy Everly was six-years-old, her mother was convinced she was a monster and tried to kill her. It isn’t until eleven years later that Wendy finds out her mother might’ve been telling the truth. With the help of Finn Holmes, Wendy finds herself in a world she never knew existed—and it’s one she’s not sure if she wants to be a part of.” – Summary of Switched.

Wendy realizes she is a changeling, princess of the trylle world (trolls). Disoriented and homesick, Wendy learns to survive in this world, as well as committing to dangerous investigations…

I absolutely adored the Trylle! Not even short, grumpy and wrinkly, these trolls are similar to normal human beings and they live in such a magical manner. I had particularly enjoyed the character relations and connections in this book, as it was very emotional and passionate, yet I had disliked the conflicted emotions Wendy had displayed as they seem childish and holds an ignorant perspective. Overall, it was a nice read for a day of hot cocoa and marathon reading.

Like what you read? Place a hold or find an available copy here.