What WPL is reading: October

Posted in: October 20, 2014 by Windsor Public Library Library | No comments

Getting into the fall means some cooler days, and with the rain we’ve been having it has been a great time for reading.

Below are just some of the things your friends at the Windsor Public Library have been reading. 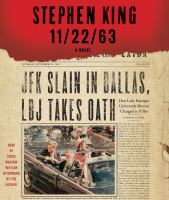 I should probably confess: I haven’t read a lot of Stephen King. The acclaimed writer is a literary superstar, but for whatever reason I’ve never really picked up his works. I’ve seen more than a few movies based on what he’s done, yet when it came time to pick up a book I have tended to go for more historical fiction and science fantasy. Being a fan of those genres, it was about time for me to pick up 11/22/63. It’s about Jake Epping, a school teacher a bit bored with life. When a friend reveals a portal that enables time travel, Jake has the means to answer a question: can the JFK assassination be stopped?

11/22/63 is a very interesting mix of the mundane aspects of everyday life, mixed with the fantastic. The hero of the story is focused on preventing the assassination, but he comes to realize there are other deeds to be done. Can he prevent the murder of a friend’s parents? Can he help teach the young minds of his era? Can he even land a job, or manage every day relationships with so much knowledge about the future? 11/22/63 was a thoroughly enjoyable read, and a lot of fun. It has its dark moments and fans of Stephen King may recognize some locales from his universe, but even if you’ve never read another King book this is an excellent one to pick up. Having only read The Green Mile previously by the author, I wasn’t entirely sure how this book would play out. It reminded me vaguely of Michael Creighton’s Timeline, and people who liked that book may indeed be a fan of this. Even if you’re not traditionally a historical fiction, Stephen King, or science fiction fan – this book is simply a lot of fun and extremely interesting. It was excellently researched, great characters, and a wonderful story. Full of fascinating explorations of answers to life’s big questions, I strongly recommend this book.

Lea: Haunted by Kay Cooper and To Dwell in Darkness by Deborah Crombie

This month I have been reading a couple of books in series that I like. I just finished reading “Haunted” by Kay Hooper, the latest instalment in her Bishop Special Crimes Unit series. As is usual with this series, FBI agents with paranormal skills battle against evil incarnate. I enjoy the series because I find the characters interesting and the story lines are not always completely predictable. The FBI agents appear in different volumes of the series depending on the skills needed in that particular story. It is not necessary to read the entire series in order, but many volumes are issued as trilogies and I definitely recommend reading each trilogy in order.

I am currently reading “To Dwell in Darkness” by Deborah Crombie, the latest in the Kincaid and James series. Unlike the Hooper books, which are thrillers, this is much more a police procedural series which is set in London, England. I enjoy this series because the stories are often multi-faceted with many bits of evidence which must come together. The character development is also a major part of the series and it would be for this reason that I would recommend that the books be read in order if possible.

(You can use NoveList to find the complete list of titles, in order, in these series.)

Just picked up a couple of science books that I hoped to dig into over the holiday weekend (in between roasting vegetables and swapping lies with the relatives).

Neanderthals cared for their injured, buried their dead with care, engaged in art forms, and survived intense cold periods in an ice age. Definitely not the simple grunting, knuckle walkers portrayed in cartoons.

How To Mellify A Corpse : And Other Human Stories Of Ancient Science & Superstition. Wonder which of our current practices will relegated to collections of pseudoscience by future writers?

Harry August, born January 1, 1919, lived a relatively normal life. He served in World War II, then took over his father’s job as a groundskeeper, later dying at the age 80. But then he was born again – at the very same time and place on New Year’s Day 1919. He did not remember his previous life at first. The memories came back when he was a child, however, and he was thought to be mad, and that life did not end well. But in the next life he has a better idea of what to expect, and eventually he manages to find help from a club of similarly “reborn” people. Having served in World War II, Harry wonders what might happen if this time he assassinates Hitler, but the club counsels against tampering with history. So in some lives Harry uses his knowledge of the future to find a safer role during the war, or in others he stays as far away as possible. During his many lives he also learns many skills and languages and visits countries all over the world.

That is how his lives go until the end of his eleventh life. As he is dying, a young girl visits with him to pass along a message to the past: “The world is ending and we cannot prevent it. So now it’s up to you.” The novel is about what he does with this information during his subsequent lives, interspersed with events from earlier lives.

I really enjoyed this book. I would recommend it to anyone who might be interested in a time travel story with a new spin, or who might like a more serious take on Groundhog Day.

As Windsor is Celebrating its Bookfest this month I chose to read one of the authors to be presenting. I am currently reading Seth’s Great Northern Brotherhood of Canadian Cartoonists. The book provides insight to the many talented cartoonists and artists in Canada’s comic industry. I have been learning much more than I anticipated and am truly enjoying this knowledgeable work.

I was first made aware of John Darnielle as a songwriter as opposed to a book writer. The sole recurring member of the indie band The Mountain Goats, Darnielle has been releasing his lyrically rich brand of folk rock since the mid-nineties, gaining a lot of acclaim for his observant, surreal, and impressionistic vignettes. Darnielle’s songs are so narrative that they often have more in common with short-stories than the usual verse-chorus-verse structure of rock lyricism. With that said, it came as little surprise to discover that this musician is also a powerful novelist.

Darnielle’s debut novel, Wolf In White Van, tells the story of Sean Phillips, a young man who has become disfigured after a failed suicide attempt. His appearance keeps Sean isolated from the outside world and he spends his days in a fantasy realm of his own creation: the online gaming world Trace Italian. Operating the game from his small apartment in southern California, Sean guides players from around the world through his imaginary terrain. While he initially finds contentment in his online world, disaster strikes when two high school students and obsessives of the game take their play into the real world. Wolf In White Van is a haunting and hypnotic novel, full of the same dark sense of humour and slightly surreal story telling that features in the works of Bret Easton Ellis, J.G. Ballard, and Anthony Burgess.